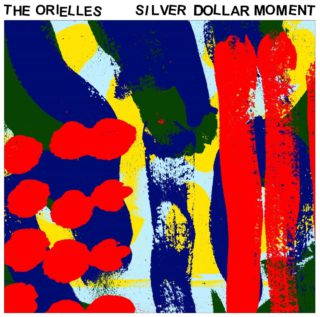 Historically Heavenly Records has a knack for unearthing melodic, tuneful indie pop gems. The last few years has seen artists like Hooton Tennis Club and DRINKS put out lovely records, daydreams that waft into actuality and onto the 6music A-list. While these sounds have been pleasant and eternally unobjectionable, there comes a time when enough is enough, and inoffensive indie pop becomes tiring. However, The Orielles’ ‘Silver Dollar Moment’ is not that time – a debut album with the potential to charm even the most jaded cynics.

Hailing from Halifax, The Orielles have a combined age of just 56. And while ‘Silver Dollar Moment’ has obviously been the toil of several years’ hard work for the trio, it’s an LP that sounds almost effortless throughout. Bristling pop melodies cascade from Henry Wade’s guitar, as Esmé Halford’s ethereal vocals paint pictures of modern cinema; particularly as she sings “your Dogtooth may shape your life” (in reference to Yorgos Lanthimos’ 2009 movie Dogtooth).

Considering the realms in which this album exists in – jangly indie pop, a genre historically not lacking in archive – it’d be easy for this to be an invisible venture. However, it’s not just their forays into hypnagogic pop, their dabbles in disco or the smattering of shoegaze that makes this album stand out from the crowd. No, it’s their disarming charm and canny ability to hit on an earworm melody that right now make them a cut above their contemporaries.