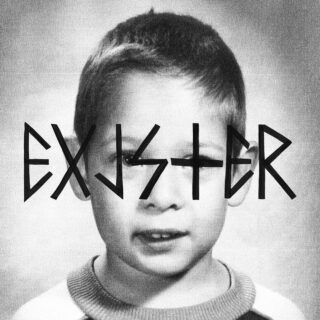 The perils of purgatory are well-documented, but in the world of music they remain largely unspoken. Nobody likes to talk about it, but a gap exists between the living and the dead, an unfortunate space where popular music as we know it gets lost in the ether; neither here nor there, it just sort of lingers.

On Exister, The Soft Moon willingly navigate this nowhere land, traipsing between lightness and darkness with no real direction. At times, The Soft Moon seem to know exactly what they’re doing. ‘Sad Song’ reveals a new, brighter side of the project. The track is quietly hopeful in tone, crawling slowly through the darkness with every synth shimmer before popping it’s head out into the light of day.

Likewise, the album’s darkest moments also create the illusion of a masterplan. The deathly drum machines and reverberated keyboard stabs of ‘Face is Gone’ and ‘Stupid Child’ are superb pieces of post-Nine Inch Nails sulktronica, proving that, when The Soft Moon commits to a sound, there really is no one better in the business.

Unfortunately, despite these excursions to the extreme, for the most part the album is focused purely on the mediocre middle ground of the netherworld. The solemn chaos of ‘Become the Lies’ and ‘Monster’ attempt to shock and uplift in equal measures, but by trying to bring both sides of his sound together The Soft Moon end up achieving neither, leaving the listener with nothing more than a strangely bitter retro aftertaste.

With Exister, The Soft Moon has learnt things the hard way: it’s darkness or light. Never darkness and light. In the afterlife it pays to be decisive.