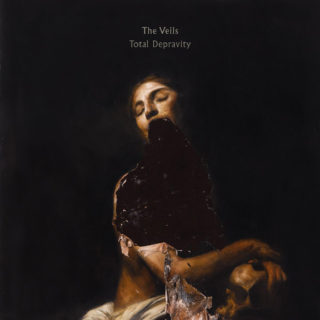 During their 12-year career, Finn Andrews’ Veils have always been plumbing the sonic zeitgeist: in their studio albums, Andrews’ dark, signature ballad songwriting has constantly been shaped to embrace the new sonorities around at the time of the recording. ‘Total Depravity’, The Veils’ fifth album, makes no exception, marking the first step of the British outfit into the electro/hip hop realm, the spark to ignite this new development being a fortuitous encounter with Brooklyn producer and one half of Run The Jewels (and fan of the band) El-P in Los Angeles. But if the preconditions may seem good, the same cannot be said for the result.

Alongside songs like ‘In the Blood’ and especially ‘Iodine & Iron’, which sound powerful and genuinely interesting, are moments that aren’t convincing and fitting enough for a band of this creative calibre. ‘King of Chrome’, for instance, with its Kanye-esque preaching approach, borders on cultural appropriation, while the filtered voice and ’90s R&B backing vocals on ‘Do Your Bones Glow at Night’ is a total depravity that culminates in a big blunder.