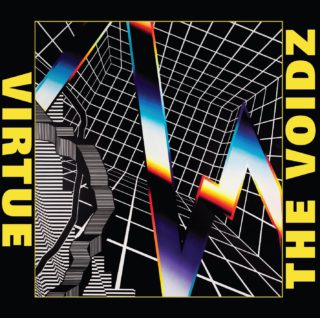 The Voidz are shorn of ‘Julian Casablancas and…’ but continue the self-conscious escape of their front man from a taught, pepped up aesthetic that The Strokes repeated, developed, parodied and carpet-bombed on the albums that followed the debut.  Beginning with 2009’s solo excursion ‘Phrazes for the Young’, a set of incongruous genres have been marshalled to carry out the iconoclastic trip. On ‘Virtue’ the most Strokes-compatible is served first, on lead single ‘Leave it in my Dreams’, before giving way immediately to what we expected: a hi-vis crystal splash of melting shards and abrupt changes of direction, carefully-worked and throwaway ideas smashed together, twisted and snapped; the sound of assured creativity motoring away with no one saying ‘No’.

Casablancas is following the path of those dark seedy albums Iggy Pop or Lou Reed made in the wilderness, adopting a strategy of excess with some deliberately tacky swings that obscure an inebriated stance and the vintage of their original frame of reference – see the title of ‘AlieNNation’.

Even when it’s not on its best foot it’s funny and engaging, and this is less goth-y and better executed than ‘Tyranny’ (2014). R Stevie Moore and The Cars loom heavy, making it sound like ‘Come Down Machine’-era Strokes at points and if you thought ‘One Way Trigger’ was genius you’ll find plenty to enthuse over here. Casablancas’ eighties dance and pop tendencies have been whipped through a YouTube suggestions loop of afro-beat, slam poetry, vapour-wave, Chis Hedges videos, hi life, machine-funk, you name it – a sense of eagerness and fried focus is signaled with wild autotune on the second track and follow-up single ‘QYERRYUS’.

System of a Down, Marilyn Manson and, uh, The Chromatics are channelled on ‘Pyramid of Bones’ next and there is a huge spoonful of late Michael Jackson, particularly on ‘All Wordz Are Made UP’. Two thirds in, ‘My Friend the Walls’ is like David Essex darking out on corners of White Album and it’s got the record’s best chorus. From there we drop into the Rick James, Victrola and Metronomy-flavoured ‘Pink Ocean’ before Pet Shop Boy-raps contra corporate overlords on ‘Black Hole’, doing something similar over a grinding metal riff in ‘We’re Where We Were’. ‘Permanent High School’ revives familiar bete noirs such as the pettiness of the music biz and a wider culture of prolonged adolescence under NATSEC aegis. ‘Think Before You Drink’ also indicts furiously, even as it provides a breather sound-wise, with a nude acoustic guitar to match its romantic anti-industrialist, anti-growing up sentiment.

For all the ferocious deviation and chastening of order going on here, what’s attracted and repelled, sliced open and infected us with Casablancas has been his louche, drunk vocal delivery, bag full of father issues, neat way with arpeggios and a sentimental fondness for parallel minor 6ths. Throughout its XtraLarge-n-sprawlin 15 tracks, these remain a satisfying core on ‘Virtue’.