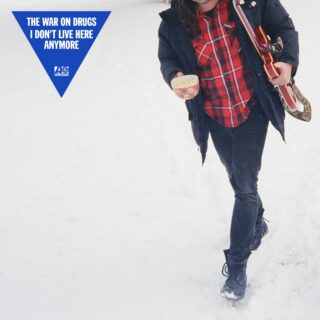 There’s something comforting, on a homely level, about a new album from a band who has been around the block countless times. The War on Drugs released their first album back in 2008; 13 years on, with over a decade of experience behind them, it’s no surprise that fifth album I Don’t Live Here Anymore is a record filled with reflection about change and fate. The essential sound of indie-Americana that The War of Drugs have utilised to their musical advantage leads the way yet again, yet this is a capital-A album that sticks you right in the middle of a riff-laden personal journey.

Road-trip-worthy and timeless, I Don’t Live Here Anymore takes The War on Drugs in a more commercial direction, but they avoid any clichés. With Springsteen-shattering melodies and orchestral-scale guitar arrangements, the uplifting instrumentation gathers all the threads of memory and reality together into a patchwork of past regret and present hope. Thoughtful lyrics like “Maybe I was born on the wrong day” from ‘Change’ and “Is life just dying in slow motion?” from title track ‘I Don’t Live Here Anymore’ echo in your mind long after the song ends.

‘I Don’t Wanna Wait’ has a certain hypnotic dreaminess that breaks into gorgeous heartland rock that could soundtrack an ’80s rite-of-passage film set in midwest America. The record’s drive-time appeal feels like a bonus and adds to its perpetual quality. Existentially moving through life, there isn’t a tone of melancholy in Granduciel’s vocals as high tempo tracks propel the album forward; instead, I Don’t Live Here Anymore feels like a hand being held out for you to hold, to accept the past and be eagerly thrown head first into an energised present.

The War On Drugs