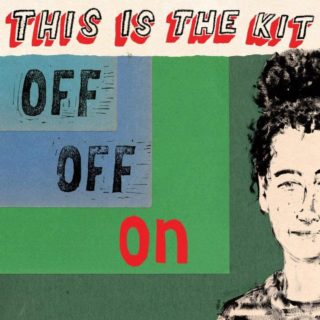 “You won’t make this change by slagging things off,” warns Kate Stables to herself as much as anyone on ‘Carry Us Please’. “Go get some ideas, now what have you got?”

By the release of 2017’s career-best Moonshine Freeze, Paris-based Stables had been steering her This Is The Kit project across four albums, developing as an intimate and crisp songwriter but deviating little from her sparse, though gorgeously arranged, new folk template. On Off Off On, whilst the emotional range of its predecessor may be slightly narrowed, there’s a commitment to broadening the sonic palette that frames Stables’ writing.

Working with producer Josh Kaufman, together they’ve crafted something that gives life to an always-dormant Robert Wyatt influence – jazz trumpet is used less as an ornament, as on previous records, and pushed further to the centre. On tracks like the soothing ‘Starting Again’, it adds heart and enigma to Stables’ writing. And as a writer she remains a novelistic marker of the internal life. “This is what they want, why are you still here? This is what they said, this is what you get,” she sings on the excellent ‘This is What You Did’, flitting between anxiety attack and self-help mantra. ‘Coming to Get You Nowhere’ is similarly redemptive, its nursery rhyme vocal and glitchy drumming even evoking Stereolab. When it swerves the wheel from a tendency towards widescreen but gutless National-style indie, as This Is The Kit Stables remains an engaging voice on this intimate record.

This Is The Kit