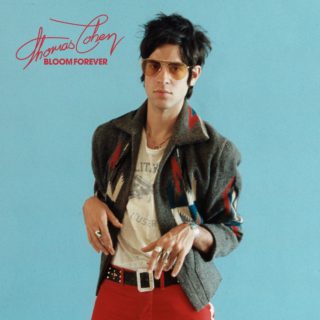 “There’s nothing more a perverted ear with a certain outlook can find out from this record,” Thomas Cohen told Loud and Quiet earlier this year; a kind of defensive disclaimer ahead of his debut solo LP release. All the same, there’s undeniably a sense of emotional voyeurism in hearing the 25-year-old widower of Peaches Geldof sing couplets like “I will hold on to/The part of me that is in love with you” about his late wife.

‘Bloom Forever’ roughly chronologically charts the birth of Cohen’s two young children, the passing of their mother and their father’s progression from the depths of grief to acceptance. Cohen is right in that this isn’t the place for lurid detail about his deceased partner, her battle with drug use or her passing. What it is, though, is a searingly honest account of a young man’s loss of the one he loved most.

Having recorded much of the album in Reykjavik, the former S.C.U.M. vocalist has parlayed influences from people like Van Morrison and Scott Walker into a deeply personal singer-songwriter’s album of seventies-style bluesy Americana and languid piano ballads. From jazzy six-minute opener ‘Honeymoon’ (replete with sax solo) through the painful ‘Country Home’ and cathartic closer ‘Mother Mary’, this is the album Cohen simply needed to make.