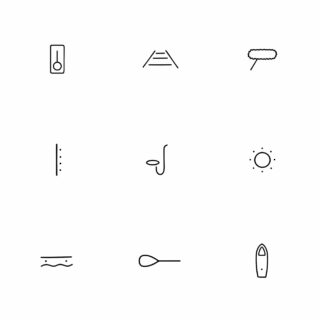 French producer Thylacine has history in using travel as the conceptual basis for his albums: 2015’s Transsiberian was set entirely on the legendary locomotive, while Roads Vol. 1 and 2 were assembled from journeys down the highways of Argentina and the Faroe Islands respectively. On this fourth album, however, entirely new and ambitious heights are scaled.

Each of the titular 9 Pieces here were created independently from each other, triggered by nine separate journeys into disparate realms across Europe and Western Asia. The tracks ought not to tesselate too well, but in Thylacine’s hands they stitch together to form a patchwork collage that uncovers unity in their terrains and in the humanity that fills them.

On ‘Polar’, we hear the thin sheen of Norwegian icecaps give way to deep, warm pulsing patterns, bass sounds emulating the great movements of the tides underfoot. There is desolation here, great pervasive expanses of hostility, but they are gloriously undercut by sliding synths that blaze auroral trails through the night sky. And then, immediately, we are entirely elsewhere. A baglama (a Turkish lute) plucks and twinkles, its soundwaves bouncing off troglodyte caves in the titular ‘Anatolia’. The sun exists here, deep scorched colours abound on all sides, the summer wind scything across the boughs of the Steppes. And yet, the sense of the solitary is similar. Great expanses are still detectable, and Thylacine’s synthesised rhythms still undulate in the same way, just with different surface vibrations.

What 9 Pieces teaches us is that the longing for expression is common everywhere, it is just the mode of communicating it that changes. Across Turkey on ‘Bosphorous’, there is blistering urgency. No time for contemplation here, this is a place for business and activity; we hear the human voice for the first time and we are thrust headlong into an Istanbul crossroads and left to fend for ourselves. A nodding, almost motorik rhythm emerges, a whip-cracking pace of life that demands respect.

The sound of Ukrainian tanks that were recorded five years ago carry paralysing poignancy now on ‘War Dance’, as Thylacine refuses to flinch or divert our gaze from the dark side of our culture. If there is hate in the world, then, it is concluded, there must be hate somewhere in the human condition too, and we scar our homes with it.

‘Night Train’ is propelled by field recordings of the Paris to Nice line, the sound of rail tracks, whistling mechanics and sliding doors lending a percussive, cyclical pattern that is familiar to all long-distance travellers. That hypnotic, semi-fugue state that one can enter over long periods of time on the move clearly serves as Thylacine’s inspiration here; if travel broadens the mind, then he has yet to find a horizon distant enough to contain his ambition.