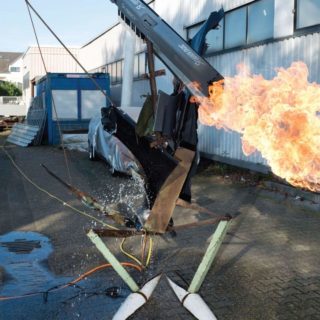 In a crowded field, few more than Tim Hecker typifies the spirit of innovation in neoclassical music right now, regularly taking on new ideas and resisting the incremental safety of some of his contemporaries. The Canadian electronic auteur spent time in Japan for his ninth record, ‘Konoyo’ (translated ‘the world over here’), and the effect is as challenging and transcendent as anything in his back catalogue.

Primarily, the album is influenced by gagaku, a form of traditional Japanese classical music performed at the Imperial Court in Kyoto for over a millennium. Figures like the drone pioneer La Monte Young have taken heavy influence from gagaku previously, but Hecker seems impatient to shine a light on the most radical elements of this music. Some of ‘Konoyo’ was recorded in a temple on the outskirts of Tokyo, and opener ‘This Life’ introduces Hecker’s marriage of traditional Japanese music with electronica, beginning with the most straightforward employment of gagaku chimes and cymbals on the record.

Though the album is a departure from its predecessor, ‘Love Streams’, which used the Icelandic Choir Ensemble, choral music remains a touchstone for Hecker. The spectral choir that begins ‘A Sodium Codec Haze’ may be only a red herring (the track graduates into woozy, strained noise) but it helps draw a thread through Hecker’s disparate works.  The anxious, throbbing drone of ‘In Mother Earth Phase’ is simultaneously tortured and blissful – Hecker’s sweet spot – and the sonic associations with ceremony and ritual lend a gravity to the record.