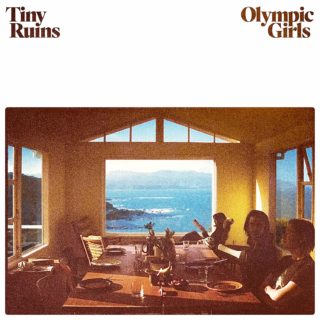 The third album from Auckland-based Tiny Ruins comes after a year of experimentation in the studio and builds on the minimalism of previous records.

Opener, single and title track ‘Olympic Girls’ is underpinned by a cycling refrain while percussion punctuates with hollow taps and shimmering crashes as the track grows. It sets the scene for an album confident in its vulnerability and luxuriating in a bigger sound.

The fleeting beauty and eyes-wide wonder of autumn nights illuminated in a bright-white moment are swooned over on ‘Sparklers’, a flickering tone at the outro of ‘Holograms’ bringing something digital to the soft, acoustic sounds elsewhere. There is the folksy balladeering of Simone Felice and the ephemeral other worldliness of Marissa Nadler resonating through closer ‘Cold Enough To Climb’.

Sitting somewhere between folk, blues and easy listening, there is a laid-back but experimental tone to ‘Olympic Girls’, as layers of instrumentation swirl around the richness of Fulbrook’s vocal. Couched in ephemeral imagery, the untouchable but deeply felt is explored throughout on an album that will warm you on even the coldest of days.