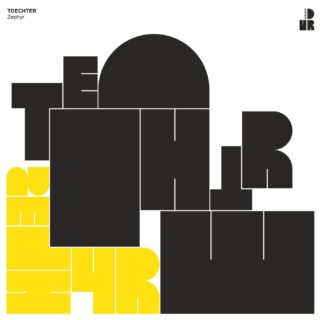 The three musicians behind Toechter – Marie-Claire Schlameus, Lisa Marie Vogel and Katrine Grarup Elbo – all grew up immersed in the conventions of classical music. With this debut album as a group, they seek to tear those conventions down, dancing at the outer edges of what we’ve been taught to expect from music made with violin, viola and cello.

They rejoice in learning everything there is to know about these instruments, so that they are best equipped to fashion a new way forward for them. We hear it on ‘Charms’, where layer after layer of acoustic and electronic paraphernalia fill out an entire cathedral of sound: elegant, whistling glissandos of violin strings, sandpaper grazes of white noise, looped jitters of handheld percussion and brooding, imposing cello drones all descend into a mutant digital netherworld, where the track’s constituent parts wrestle each other for the final spot on the last plane out of here. It is intoxicating, and not a little disturbing.

If there is a sense of something seismic going down, then a track named ‘Tectonics’ seems apt to follow. We hear the treated vocals of Schlameus beckon something or someone from far, far below, and either her musical accompaniment knows what horrors she is provoking or, like us, they have been intimidated by her mysterious incantations. An echoey beat appears on the horizon, but it is approaching quickly, as violin and viola perform a snake chant-like spell. ‘Verbal Error’, similarly, reaches levels of unease we might expect from a Mica Levi score, with a twitching, arrhythmic beat and confused washes of wordless vocals being later joined by hyperactive, high-pitch digital tones, like an infestation of fireflies all around us.

Restless pizzicato strings are in search of a binding rhythm on ‘Pendulum’, while ‘Zephyr’ seems more hurricane-damaged than caressed by the featherlight wind that its title suggests. On ‘Rêve’, sketches of sound come and go in a blur, with single, short-lived darting lines of violin depicting the flickering, ungraspable images that fly past our mind’s eye as we sleep. There is no narrative sense to ‘Rêve’, as there isn’t to the album more generally – just the rule-free chaos of the subconscious mind that has been set free from the restrictive logic and limiting conventions that keep the rest of us in line.