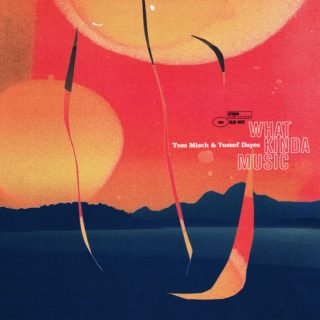 Both hailing from South East London, Tom Misch first clocked Yussef Dayes’ talent on the drums at a primary school talent show. But while their postcodes may overlap, the pair’s musical styles remain distinct: Misch makes soulful, hip-hop leaning pop, while Dayes is respected as a key force in the UK jazz scene.

The pair embrace their differences to great effect on What Kinda Music, keeping in tune with each other throughout as the record sways between soothing calm and pinch points of intensity. An untrusting, warbled riff animates the title track, before a gentle saxophone ripples through ‘Festival’. Freddie Gibbs shows up for a pointed and immensely satisfying verse on ‘Nightrider’, which the pair follow up in similar style with the calming ‘Tidal Wave’.

With its nuanced drum flurries and catchy chorus, ‘Last 100’ is intricate yet simple. “Don’t feel this time when I’m with you; 100 days go by and feel like two”; the lyrics seem to gain added poignancy at a time when many of us feel daunted by the coming months.

While Misch and Dayes don’t appear an obvious match, their collaboration soon makes complete sense on this record. Landing somewhere between jazz and pop, What Kinda Music is a joyful listen, one which is as experimental as it is laidback.