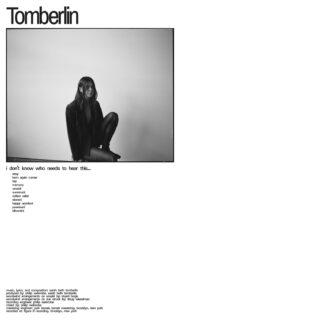 Born into the Baker-Bridgers-Dacus school of singer-songwriters, Sarah Beth’s second album as Tomberlin joins a roll call of artists quietly making good the age-old tedium of venting into an acoustic guitar. A groundswell of lower-case letters, dreams, worries, make-your-own Joy Division Closer album artwork and nuanced musicality makes this an immediate highlight in the sad scene, primed for a generation less ashamed and more willing to explore their own vulnerabilities than before. Call it therapy; Tomberlin opens a valuable door on I Don’t Know Who Needs To Hear This.

Her debut album At Weddings was a timid coming-of-age in 2018; a self-reflection framed through the lens of other peoples’ togetherness, caught in the complexities of comparison between celebrating friends’ achievements and lamenting your own stagnation. Its moments of fortitude, from ‘Any Other Way’ to ‘You Are Here’, hinted at a magic behind her songcraft never fully realised. But while many of the same insecurities are written about here, Tomberlin now offers a steady voice of comparison for others instead of searching for one herself. To butcher an analogy, this is her Clouds to last time’s Song To A Seagull.

The jauntier, Americana-tinged lines of ‘Born Again Runner’ and ‘Sunstruck’ deride their own heartbreak, like Cass McCombs riding miserably on a bucking horse, waiting to be thrown off. There’s a fast-paced slowness across the whole record; a quiet organ chirrups over all kinds of impulsion, and a pounding synth in ‘Memory’ is a soft headache backing the otherwise quiet serenade. Tomberlin’s reflections on isolation and loneliness come packaged with solutions and playful philosophies, expressed as proverbs varying in their logic.

In ‘Tap’, her pain is aired through conversations about reality television and commodity culture with a self-awareness that never invalidates the hurt of its own expression. Even ‘Collect Caller’ – a juvenile composition in context – sinks into the self-assuredness of a standard, while ‘Happy Accident’ co-opts a Viagra Boys-does-John Prine riff into something both brilliantly analogue and irritable – a devastating TORRES-like soul-search seconds from eruption (“What’s the point of this if I’m not how it ends?”)

The album highlight comes at the close, with an abbreviated title track duetted out-of-pace with Felix Walworth (Told Slant). It was the first song released ahead of this project, resting on a childlike lullaby played back-and-forth as if it were being learnt in situ. Recontextualised to follow the ten tracks before it sounds like gestated wisdom. Tomberlin has come a long way in the four years since we met her, and this is her best yet.