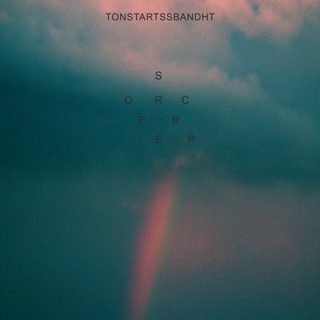 Andrew White is probably best recognised as the touring guitarist for everyone’s favourite Canadian chain-smoker, Mac DeMarco, or under his solo pseudonym Andy Boay. But it’s with his drummer brother Edwin that his experimental creativity really gels. In their swampy-psych project Tonstartssbandht, the siblings channel the hazy stoner-rock of Sleep’s ‘Holy Mountain’ with hints of The Beatles’ late ’60s output, and ‘Sorcerer’ is the latest – and possibly most impressive – addition to their surprisingly vast and stylistically intrepid catalogue.

Haphazardly recorded in the living room of their Brooklyn apartment, the album’s 3 tracks have an intentionally raw, lo-fi quality that a slick studio recording would have otherwise sanitised. Like a pair of cloaked wizards, they summon shimmering, ambient passages and transform them into riffy storms of layered, kaleidoscopic instrumentals. Andrew and Edwin’s voices murmur from amidst the foggy feedback, beckoning the listener closer, as if calling out through a smoky mist emitted from a carrot-sized joint. Their words float elusively, adding all the more intrigue to their spaced-out sound. The attention of some may lull, but others will find these 35 minutes to be mesmerising.