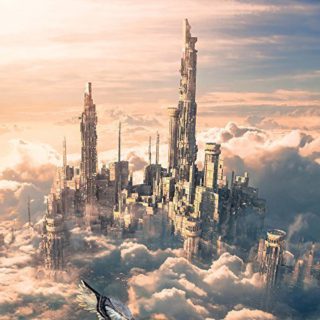 Inspired by the German Romantic movement, Luke Wyatt’s third album as Torn Hawk is another new-age adventure through the instrumental, the experimental, and the expansive. For a man used to amalgamating music and visuals, the sentiment of ‘Union and Return’ starts with the album cover itself. On it, a city dominates a soft-lit cloudscape – the type of setting Zelda’s Link would explore – and it sets the album off on an endearing fantasy tangent.

It flows straight into the breezy lilt of opener ‘The Romantic’ and is impressed over and over again as the album develops. Where ‘Borderlands’ and ‘Thornfield’ are big pictures of sweeping strings and layered grooves, ‘The Archers’ is straight from Assassin’s Creed; a tense, semi-urgent soundtrack of avoiding detection. It’s a credit to Wyatt’s exploratory ambition how easy it is to spin your own narratives around his ever-evolving guitar lines. By choosing fluidity over focus, there’s plenty to explore but in a world as boundless as the one he’s created here, it leaves plenty to forget.