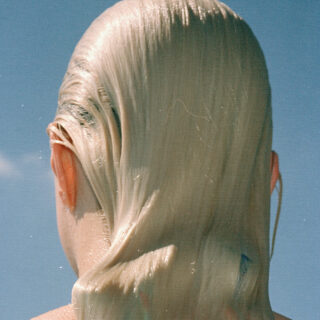 Words by Will Ainsley

It’s oddly satisfying when an artist’s name embodies the music they make: think The Beach Boys’ sunkissed sonic bliss, the colossal tumult of Einstürzende Neubauten (‘collapsing new buildings’ in German), or the Southern-tinged blues rock tremor that characterises Brittany Howard’s voice in Alabama Shakes. TRAAMS also evoke their namesake, with a semi-industrial mechanical pulse underlining all their best work from the controlled propulsion of 2020’s ‘The Greyhound’ to the clattering menace of ‘Swimming Pool’, from their 2013 debut Grin. On new album Personal Best, however, the Chichester trio leave behind some of their noisier predilections in favour of an even more regimented chug, buttressed by squeaks of feedback and stately bass reports.

There’s a great description Nick Kent used to describe the songs on Syd Barrett’s The Madcap Laughs album, saying they “just [lie] there, scratching themselves in front of you” – the same applies to those on Personal Best. That’s not to say there’s anything particularly loose about the music, more that the constituent elements orbit further and further away from that central, rhythmic throb. ‘Breathe’ (an album highlight) features a sprawling four-minute instrumental section where eventually vocals re-enter, totally transforming the track: the drum machine pattern morphs from being staid to being martial, that electronic clap sound draws the whole thing together, while the grumbles of distortion start to sound less like you’d hear them in a teenager’s bedroom and more like you’d hear them in Kevin Shields’ bedroom.

That the album was conceived of right before and recorded just after the first Covid-19 lockdown in July 2020 is evidenced by how its song structures simmer and seethe. TRAAMS have always been content to lock into a groove and stay there, but on Personal Best things are sparser, even airier; they seem less concerned about rushing headfirst into noisy workouts and more concerned about working with the time on their hands. Gutted drum machines have somewhat replaced ‘real’ drums (clock the nervy Suicide-esque tattoo on ‘Shields’), and synthesisers take on new prominence, while singer Stuart Hopkins often relaxes into a more dulcet vocal timbre. In most cases this approach works, though very occasionally a verse might trespass into neutered-sounding moany post-punk revival, a la Fontaines D.C..

Of course, it’s tempting to want a bit more Sturm und Drang – more of the fire in their bellies and sweat in their eyes that distinguished the early material – but to do so would be to miss the album’s raison d’être. The intensity doesn’t always come from the guitars but often from the vocals, where two or more singers/speakers sound in unison, an effect that recalls sea shanties, folk standards, or indeed, the sleepy vocalizations of classic ’60s psychedelia. Likewise, the album is peppered with deceptively simple riffs that Michael Rother of NEU! tended to turn out: blank-sounding and cyclical, with an air of resolution, potent in their raw-boned simplicity. Personal Best is controlled and regimented – less a joyride than a motorcade. In the words of the lovely coda on ‘Breathe’, it’s a testament to “working” and “just refining”.