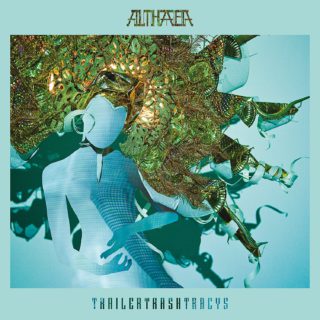 London duo Trailer Trash Traceys are not a band in a hurry. After the hazy, shoegaze delights of debut single ‘Strangling Good Guys’, three years elapsed before their debut album appeared. ‘Althaea’, their second, arrives a full five years after that; prolific they ain’t. But what they do have in spades is a sense of otherworldliness, and a determination to plough their own furrow. In a similar vein to the likes of label mates Dirty Projectors, they turn modern pop music inside out, unafraid to trample all over convention in pursuit of their artistic vision.

And the results, whilst challenging, are certainly not dull. Drawing from a number of eclectic sources (Filipino carnival music, avant-garde pop, latin rhythms and Japanese tropical music to name but four) the duo have put together a collection of songs that surprise and confound in equal measure, forever disappearing off on a tangent, refusing to be pinned down.

It’s exhausting in places, but effort is rewarded: repeated listens yield lush details and neat little melodies, heightening the sense of a band dedicated to their craft. ‘Althaea’ might lack a few genuine standout moments, but the journey from lo-fi dream pop to this has been fascinating to witness, and proof that the only way to get truly ahead is to clamber outside the lines that others have drawn.