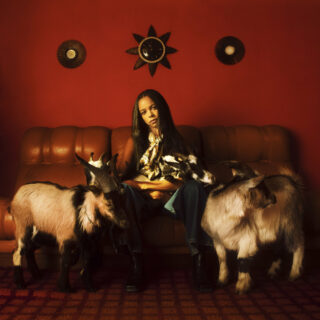 TSHA has been hard to miss these last 18 months, bouncing around various sets with the kind of sunshine energy you just want to bask in front of, and Capricorn Sun is a testament to that unabashedly bright, optimistic spirit. It’s there on ‘The Light’ with its sweet, soulful power vocals, soft steel drums, and dubby switch; on ‘Running’ with its reverb-heavy guitar and big melodic swell; on ‘Power’ as it comes to life like one of her sets – all samples, funk and giddy breaks.

But TSHA is far from being one track. On ‘Water’, she pays tribute to Malian Griot singing, chopping it up with synth and rhythmic changes of pace. The pleading ‘Giving Up’ captures a strained period in her relationship with partner Mafro (who also features on the song) and reels you in with amen breaks and pitched falsetto. And ‘Time’, with its skittering layers of percussion and lo-fi vibe, starts out a little Four Tet, a little Bonobo, before slinking into one of the most satisfyingly low-end grooves you’ll hear all summer, and then kicks on into an acid-inflected extension with a smooth, almost understated magic. If you aren’t hooked by this point, ‘Dancing in the Shadows’ moves in with a Jamie xx ‘Gosh’ liveliness before setting off for the stars in search of Underworld and The Chemical Brothers in an ambitious, accelerated rocket ride through British dance music’s past, present and future. TSHA’s just out here reimagining all of it, and it’s a truly joyous thing to behold.