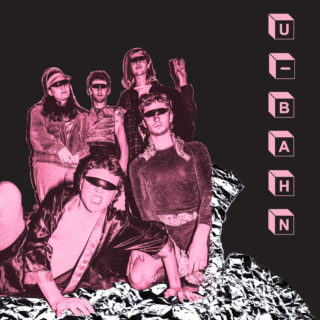 Listening through U-Bahn’s self-titled debut, it’s hard not to go straight to the Devo-comparisons. In fact that’s exactly what they do in the accompanying blurb to the release parading a Henry Rollins quote about them namechecking the legendary alt-pop group. From the cheese-wire thin guitars to the kitschy, primitive synth sounds, almost every song on this album sounds like a B-side from ‘Jocko Homo’. Plus their live shows are similarly theatrical, for which they wear big bags, wigs and wraparound sunglasses.

However, after persevering with the more noticeable new wave influences, U-Bahn clearly have some interesting points that they’re getting across. For one thing, the Melbourne band – who met when band leader Lachlan Kenny was flogging a drum machine on Gumtree – are way more sex-obsessed than their red-hatted American counterparts. ‘Right Swipe’ is a takedown of throw-away dating culture, while ‘Turbulent Love’ celebrates the joys of kinky sex, as long as you remember to, “Wrap up and protect yourself from the dreaded southern lice”.

Most of the time, though, the band crash through their source material like a drunk at a house party. Tumbling through vague no-wave soundscapes, it’s fun enough. Still, I can’t help but feel that U-Bahn lack the pure, freewheeling inventiveness of the bands they so want to emulate.