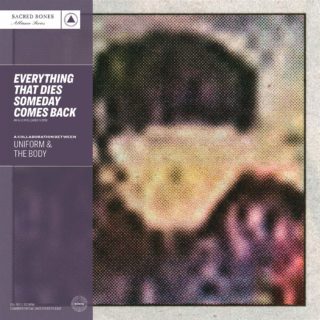 Bruce Springsteen’s ‘Atlantic City’ is a song about someone in too deep with the criminal underworld, whose inability to outrun unbreakable cycles — violence, addiction, low-income work — as well as the shred of hope that situations can improve, is encapsulated in the line “maybe everything that dies someday comes back”.

The phrase has a haunting, literary-allegorical cadence. It’s also quite metal; precisely the sort of semi-ironic appropriation you might expect from left-field industrial-metal partnership Uniform and The Body, whose last collaborative album title, 2018’s Mental Wounds Not Healing, was lifted from Ozzy’s ‘Crazy Train’. You can imagine them stifling their laughter, taking a beloved classic and painting it black. As heavy, dark and relentless as it is, Everything That Dies Someday Comes Back is the continuation of a blissful marriage, where ultimately playfulness rules.

Sometimes they find the fun in established forms, like the shouty industrial rock of ‘All This Bleeding’, but it occurs best in wacky stunts like the incongruous hip hop sample on ‘Day of Atonement’ (“I wanna die”, it says, and it’s like Death Grips and DJ Screw have temporarily crossed streams). ‘Patron Saint of Regret’ is a rotted chart-botherer, its trap hi-hats sharp as ribs, its soft vocal what’s left of the flesh, while the disarming ‘Waiting For The World To End’ is dissipated altogether, fine as mist.

While it’s easy to foresee the project slipping into novelty (all the above appeared on the previous album in some form) it’s worth looking forward to how Uniform and The Body defy expectation. Then again, if the cycle continues, that’s fine too.