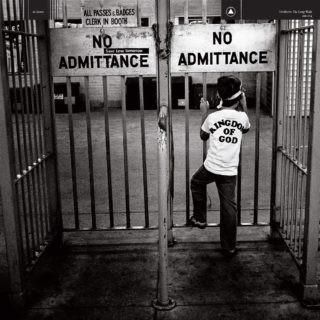 Alternative metal has come a long way since the late ‘80s, today appearing at both commercial peaks and DIY obscurity. In the latter case, everyone seems to hang out together. It’s no surprise that New York group Uniform have already collaborated with The Body this year (who hasn’t at this point?). What could be a more adequate palette cleanser before Uniform’s second album proper.

But in short, ‘The Long Walk’ isn’t quite as good as debut ‘Wake in Fright’. The backwards gear shift (lo-fi production, three-piece set-up, overall hastiness) makes it seem like a pitstop album. It might’ve made a compelling EP, sounding like days in a studio figuring out their next destination, having enlisted the help of Greg Fox (Liturgy, Zs) behind the kit.

That said, the riffs here are solid, Sabbathian classics. Halfway through ‘Transubstantiation’, they move into something with more legroom – nearly as much as they allowed on their debut. Such moments are precious on an album that usually bludgeons with hissing noise.

Lyrically, vocalist Michael Berdan sought inspiration from the Catholicism he incrementally rejected throughout his life, finding hope, peace, and tolerance where others only see monolithic, organised religion. Titles like ‘Anointing of the Sick’ indicate as much, even if lyrical content is obfuscated by two-bit production.

Listen close and you’ll hear the sludge chords of closer ‘Peaceable Kingdom’ momentarily shimmer as they ring. Much of ‘The Long Walk’ may refer to an increasingly insular America but don’t be fooled; this is metal for optimists, and a pained call to do something. Anything.