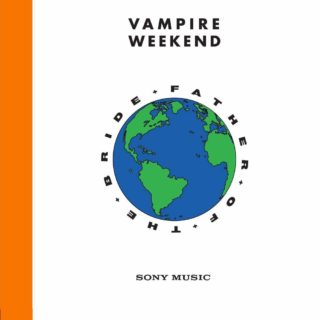 “I don’t wanna live like this/ but I don’t wanna die,” sang Ezra Koenig midway through Vampire Weekend’s last album, during a song that referenced forbidden love while raising an ironic eyebrow at New York City’s affluent suburbs. Around it sat eleven other songs full of archly self-aware, rather elliptical observations about class, religion and millennial identity, written and performed with the kind of studied, non-narrative precision that had become the band’s calling card. That line stood out, though: to keep on going, Koenig seemed to be saying, pinched and uptight, something must change.

Six years on, and having lost writing partner Rostam Batmanglij in the meantime, Koenig revives the line on Father of the Bride’s lead single ‘Harmony Hall’ – this time as the song’s chorus and spine – and the callback’s emphasis serves as an acknowledgement: change is indeed afoot for Vampire Weekend, and their fourth album bears all the fruit, both juicy and rotten, of this transition. Across an hour and 18 tracks, there are growing pains alongside beautiful rushes of metamorphosis, missteps among confident strides, and new voices, personalities and personnel all over. And while there’s plenty more than just an interpolated lyric to link listeners to the Vampire Weekend of old, the throughline from here to the band’s past is now the blurriest it’s ever been: on album four, their trademark concision is ditched for expansion, ironic self-detachment is replaced with sincerity, and where once sat a sophisticated, reductionist songwriting partnership trying to make tidy aphorisms from the post-internet cultural clutter is now a solo man in his mid-30s just enjoying the noise.

Perhaps appropriately, then, it’s when Father of the Bride is at its baggiest that it feels most comfortable, its most welcoming songs also its longest. The diaphanous Bruce Hornsbyisms of ‘Harmony Hall’, all nostalgia pangs and sighing wistfulness, find Koenig happy to stretch out, confident in the possession of such an undeniable earworm. Meanwhile, ‘Stranger’ is so assured of its chorus’ invincibility – and rightly so – that it both opens and closes the song, and while both tracks are addictively upbeat, a lyrical bittersweetness prevents them from ever becoming cloying. The breezy ‘Flower Moon’, too, a cross-pollination with The Internet’s Steve Lacy, while not so hooky, is just as easy-going, revelling in its hybrid groove and shimmy.

Then, topping everything, there’s ‘This Life’; the best thing Vampire Weekend have ever recorded, and one of those songs that leaves you baffled as to how, after 60-odd years of recorded pop, it was only written now. Built on a gorgeous call-and-response guitar chime and infectious rhythm section shuffle, and anchored by another confessional, regret-tinged lyric that adds welcome counterpoint to the summery melody, ‘This Life’ has its ancestors in the cheery melancholy of ‘You Can Call Me Al’ and ‘Help!’, but is no pastiche: instead, it’s a flawlessly constructed, glorious piece of modern but timeless pop music, accessible but unique, and dangerously moreish.

But while song length has become a virtue here, that’s not to say Vampire Weekend can no longer do miniatures. Where Father of the Bride’s longer tracks are the most inviting, its shortest are the most intriguing, offering pleasingly muted hues between the explosions of technicolour melody. ‘Bambina’ and ‘2021’, each under 100 seconds, are crisply cleansing demonstrations of brevity, the former flitty and fidgety, the latter serene and sad, and the album’s succinct final pair, full of Harry Nilsson-esque rueful romanticism, offer a calm sense of closure.

Were Father of the Bride to mine this pairing of statement songs with interstitial curios further, it would approach masterpiece status. Unfortunately, however, it too frequently becomes bogged down in songs of indefinite character, either outlines in need of colour (‘How Long’’s generic strut; the inoffensive Travelling Wilburys sketch of ‘Big Blue’) or well-made compositions that feel simply out of place. While there’s nothing inherently wrong with the smoky crooner jazz of ‘My Mistake’, the flamenco of ‘Sympathy’, or the three (three!) country-fried duets with Danielle Haim that seem overheard from Dolly Parton and Kenny Rogers’ ‘Islands in the Stream’ sessions, none contribute to the album’s cohesion, and with 18 tracks on the running order here, their absence would not have been missed.

That said, the album’s most ill-fitting song is too significant to dismiss. ‘Unbearably White’ – on the surface a mid-paced ballad about thwarted love – is also an apparent answer to Pitchfork writer Sarah Sahim’s 2015 opinion piece accusing “indie rock” of being institutionally racist that cited Vampire Weekend (among others) as contributors to a conspiracy to keep people of colour from flourishing within the genre, and although Vampire Weekend themselves are no strangers to commentary on their supposedly “preppy” backgrounds – even cultivating that aesthetic in earlier days – Salim’s was a particularly scathing, if flawed, take. Disappointingly, though, while Koenig’s response is fairly gnomic, open to multiple contradictory interpretations and (one must assume) deliberately written thus, it doesn’t take an English major from Columbia University to interpret his words worryingly. Early on, he appears to address Sahim’s accusation of Belle & Sebastian being “blindingly white” with the potentially threatening line “There’s an avalanche coming/ Don’t cover your eyes”; later, addressing Salim’s broader accusations of his own “bastardization” of African music, he pleads unavoidable cleverness: “Presented with darkness, we turned to the light/ Could have been smart, we’re just unbearably bright”. It’s not just in the lyrics, but the delivery, too: for the first time ever, Koenig presents himself as audibly vulnerable, and as the coda fades out – “Call it a day/ Call it a night/ Callous and cold and just unbearably white” – his charmless petulance feels uncharacteristic, in contexts of both Father of the Bride’s otherwise fairly mild-mannered mileu, and in that of Vampire Weekend’s historically strict self-control in general.

It’s tempting to read ‘Unbearably White’ charitably as Koenig at breaking point, desperate to refute the oft-repeated portrayal of his band as the very exemplars of whiteness (despite the fact that, until very recently, the songwriting duo was half Iranian), writing a wilfully antagonistic song to demonstrate his understanding of the many sides of this thorny issue. However, in 2019, creating something that, at least from one angle, could be read as flirting with white supremacism is fairly reckless behaviour, regardless of any irony, wit or nuance, and as the virtues of people in power listening to – and not contradicting – the marginalized are becoming increasingly obvious, a song this directly targeted could yet prove to be somewhat culturally deaf. Either way, though, the song leaves a nasty taste in the mouth, and is the album’s single biggest marker that Vampire Weekend is no longer what it was.

From one perspective, Father of the Bride is the worst Vampire Weekend album – it’s the only one to contain more than a few minutes of filler, it’s the loosest and the least charming. Then again, that’s in comparison with a hat-trick of predecessors as strong as from any band this century and, taken in isolation, it’s a perfectly enjoyable hour of Spotify fodder. From another, though, this is a Rorschach blot of a record, its appearance having the potential to shift depending on the listener: a song as structurally perfect as ‘This Life’ seems built to reach far beyond Vampire Weekend’s existing constituency, and while the wider range of influences and increased biographical honesty may counter previous accusations of aloofness, that loss of ambiguity will also alienate others.

More than anything, though, Father of the Bride is – the aberration of ‘Unbearably White’ excepted – the most mild Vampire Weekend album. Where its predecessors were bratty or bullish, the band’s fourth album is largely warm, personal, and not a little pleasantly middle-aged. For a man who’s only just turned 35, this maturation might sound untimely. For someone like Koenig, on the other hand, who’s always seemed advanced for his years, it reads more believably as simply the next natural step.