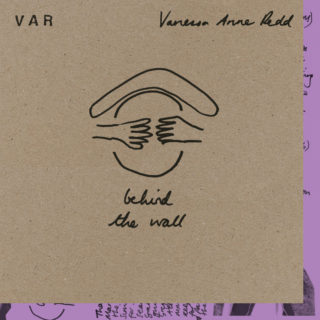 Putting some distance between her previous electronic collaborations and her new solo career, VAR – otherwise known as Vanessa Anne Redd – has assembled what can easily stand amongst the best singer-songwriter albums of the year. Her ‘Behind the Wall’ is “a simple grunge-folk affair” in her own words, but there’s definitely more to it than that, despite the cute, handmade packaging. With bits of Angel Olsen and P.J. Harvey glimmering here and there, the British-German musician has created a brand new contemporary folk, sounding its best in piano ballads, like ‘Road that Drives Us’, and in a more guitar driven songs, such as ‘Twilight’.

There is brass in ‘Proof’, and strings in the title track, reminiscent of some Lennon-McCartney grandeur. ‘Beast’ is then a great folk downtempo track, just as ‘Escape’ reverberates an electric Tarantino mood. Redd’s voice is flawless when it hits the higher notes and almost as good in a deep murmur. Ten tracks to perfectly suit a bonfire in the woods (in an un-right-on way), an empty room for one, and in a Nashville club.