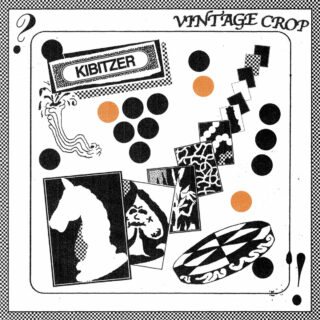 On ‘Double Slants’, perhaps the best song on Aussie punks Vintage Crop’s new album Kibitzer, vocalist Jack Cherry observes in reluctant admiration: “His wit is as quick as lightning / His disapproving gaze is the thunder that follows”. Drawing an analogy with one of nature’s great one-two punches, it captures both the anticipation and the disorientating change of pace which, when sufficiently invested in, also characterise Vintage Crop’s best moments.

While the band has peppered each release since their 2017 debut with quips about class struggle, capitalism and other highfalutin topics such as town traffic, they’ve yet to nail their style of intense sardonic deadpan to quite the same extent as, say, Parquet Courts. Instead, their value largely rests in their dedication to packing as many fast turns and puncturing guitar lines in as possible. And in such a fashion does their latest album, Kibitzer, continue.

Tracks like the aforementioned ‘Double Sants’, which rattles through a ruthlessly alternating verse/breather/verse structure, and ‘Under Offer’, a nod to the inherent emptiness of splashing the cash coupled with low-end guitar lines reminiscent of Arctic Monkeys’ Favourite Worst Nightmare, capture the enthralling unpredictability Vintage Crop often exhibit so well. The effect is numbed somewhat however by a handful of songs laboured by dead, hollow choruses (‘Casting Calls’), tepid lyricism (‘Impact of Wisdom’) and lolling, expressionless performances (‘The Bloody War’). The closer, ‘Switched Off’, another sadly dull and predictable entry, perhaps unintentionally calls out where some of the issues lie for Kibitzer.

Not every swing is a miss, with tracks such as ‘Hold The Line’ and ‘Drafted’ sitting comfortably alongside ‘Double Sants’ and ‘Under Offer’ as showing Vintage Crop in their best light. However, on too many occasions the impression is that the strength is missing from the band’s punch, the result an album occasionally awkward in its apparent reservedness. An album slightly lacking in what, fundamentally, makes Vintage Crop tick.