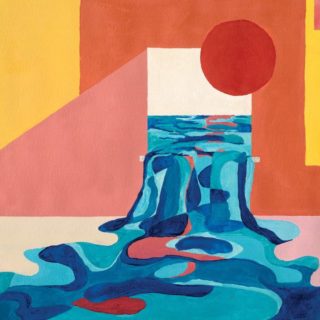 Treat ‘Incidental Music’ like an investment. The tracks on W.H. Lung’s debut album aren’t exactly bite-sized, and nor is this the sort of record for fits and starts. Once you’re in, you’re staying in for the long haul. ‘Incidental Music’ is glam and cinematic, an expansive piece of work that shares similarities with Future Islands, The War On Drugs and Anohni. It is also by turns dark and uplifting, retro and futuristic. Opener ‘Simpatico People’ conjures images of an ’80s club scene, with it’s shiny beat and people-watching lyrics, while ‘Bring It Up’ veers towards new wave, a post-punk vocal mixing with psychedelia.

Based in Manchester, the band have taken their time with their debut album, spending two years slowly building something they can stand behind. And their pacing has paid off. Almost every shoegaze-y track here is crafted to the point of being a spectacular addition to your soaring rock collection. On ‘An Empty Room’, for instance, dark synths build like a swarm of wasps, then give way to a minimalist guitar and eerie, poetic lyrics that hint at a psychotic break. Then, there’s ‘Second Death of My Face’ – the record’s penultimate track, which belongs at the end of a John Hughes movie, when everyone has grown as a person and suddenly have the strength to face the world. This is stunning work that’s more inventive than it may first appear.