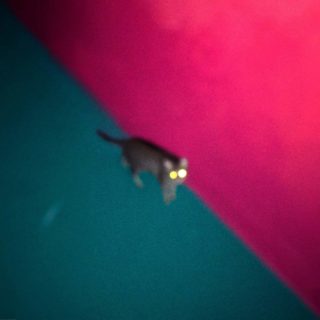 It’s hard to believe dance-punks !!! have been partying for over twenty years now, outlasting their peers who revitalised the genre with them in the 2000s. You have to admire their stamina. Unfortunately the band’s eighth album, featuring appearances from Angus Andrew and Maria Uzor, is a bit of a shambles. That’s not a problem in itself – the best parties are often the messiest – but Wallop is neither incompetent nor ambitious enough to be an enjoyable disaster. Bereft of any narrative through-line, and with songs oscillating from godawful to great, the album sounds less the work of seasoned party rockers and more your friend who hits shuffle on their Spotify and calls it a day.

That inconsistency kills the album’s flow. The whiplash going from the dreary, vaguely dystopian ‘Off the Grid’ (and its bass-heavy coda ‘In the Grid’) into the sparkling synth melodies and crunchy guitars of poppy standout ‘Serbia Drums’ weakens the latter’s punch. Unnerving bop ‘Domino’ has the bad luck of following the worst song on the album, ‘$50 million’, in which hollow platitudes like, “I stand accused of all the usual stuff”, and, “my politics are still unproven”, are delivered with far more vigour than they deserve. Even when the tracks on Wallop are good, the relentless stop-start pace means that there’s no momentum for them to ride.

There are moments of spontaneous fun to be had at !!!’s erratic party but too often the buzz is killed by listless beats and half-baked social commentary. Mum, can you pick me up early?