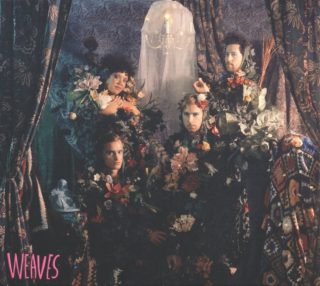 If you think that mixing synth-pop with lo-fi indie will no doubt result in a bad experience, perhaps you’ve never heard the music of Weaves. Hailing from Toronto, the band, founded in 2013 and driven by the creative force of Jasmyn Burke and Morgan Waters, worked on their debut album over the last two years from voice memos recorded on Burke’s phone. Weaves’ DIY approach spans art pop and alt. rock, creating a pretty irresistible sound, oscillating between the two edges and through the 11 tracks on this first album.

From the opening song, ‘Tick’, released as a single a year ago – a lesson in how gleaming synths can be used in pop – to the slack rock of ‘Shithole’, the Pixies-esque ‘Two Oceans’, and the exotic atmosphere and percussions of ‘Coo Coo’, Burke’s vocals make a perfect blend with Waters’ dirty guitar, her naturally controlled vocals bouncing against a feedback wall and landing perfectly in style. There are no ballads or down-tempo tracks here, so on one hand it may lack dynamics, but it also works in Weaves’ favour to keep the momentum going. Constantly fun, they feel like a band on the launch pad.