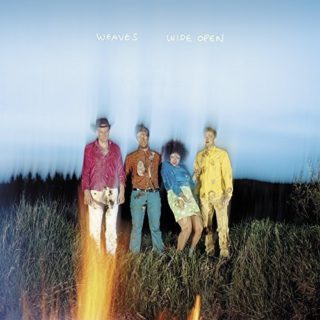 On the cover of Weaves’ second album, the Toronto band are dressed in bright primary colours. On closer inspection, they’re also covered in soot. It is the perfect representation of ‘Wide Open’, the follow-up to their 2016 debut. This time around Weaves’ outlook appears sunnier and more upbeat, with Morgan Waters’ guitar parts janglier than ever, while Jasmyn Burke’s lyrics explore darker themes of insecurity and political alienation. ‘Scream’ features Inuit throat singer Tanya Tagaq’s wordless grunts whilst Burke deplores us to scream out our name. It is an arrhythmic manifestation of the mire of living in 2017 and it feels good.

Elsewhere, from the glam-stomp of ‘Slicked’ to the open-road Cinerama of ‘Walkaway’, they’ve come a long way from their punk roots (only the 60-second ‘Motherfucker’ recalls their earliest days), but it is a switch that works well. The brilliant ‘Grass’ is indebted to the deadpan existentialism of Courtney Barnett, whilst on the title track, Burke sings, “I’m just a nomad on the land that don’t belong to any of us / The world is wide open to us.” It’s the credo of the album and a nice analogy for their musical evolution too.