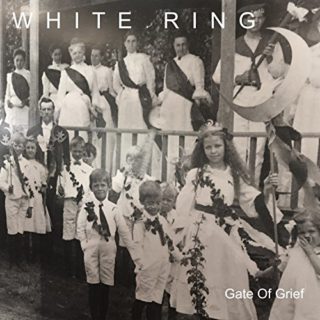 When it was originally released back in late 2010, White Ring’s debut EP, ‘Black Earth That Made Me’, sold out almost instantly. A phantasmal, genre-warping release melding harsh electronics with shrouded vocals, it revealed Bryan Kurkimilis and Kendra Malia to be one of the finest exponents of the then burgeoning witch house scene. Seven years on, the pair’s long-awaited full-length debut gestures the unmistakable hallmarks of past time.

Having begun recording in 2011, ‘Gate of Grief’ is openly laced with the spectre of personal battles – not least the illness that led to Adina Viarengo being drafted in to assist Malia with vocals. This goes some way to explain why, from one song to the next, it veers between pure doldrums and exultant reprieve (Kukimillis has said, “There is a lot of tragedy in this album but there is also hope at the end of it.”) Highlights such as ‘Fields of Hate’ and ‘Amerika (Lord of the Flies)’ flicker into view like distant flares in some dark, unsettled sea. While the former simmers between synth-led ambience and trap-beat bliss, the latter is a real broody gem. Elsewhere, the aggression that has always underpinned White Ring’s craft peaks on lead single ‘Leprosy’, which doubles up as the first song written for the album.

But while the fixation with time serves it conceptually, the sonic disconnect that pervades the uneven and drawn-out ‘Gate of Grief’ can be traced back to the time it took for it to see the light of day. With it, one can’t help but feel that the crystallised explorations of loss on ‘Black Earth…’ were very much of their time.