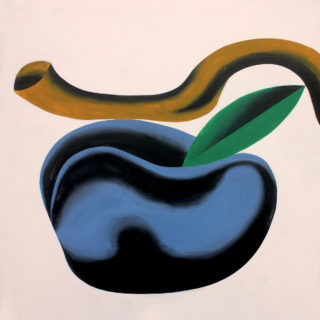 The soft swell of Brooklyn two-piece Widowspeak’s fifth album Plum is nothing new: a blend of shoegaze and campfire sad-rock permeates the nine-track LP intimately, its stray ashes drifting through the (spiritually, if not geographically) Pacific Northwestern air with a linger-on-your-clothes kind of comfort. Their music’s own unassuming humility since 2011’s self-titled debut has always been half-awake in its allure, but there’s a rumbling, phantom thread in the strata of Plum that elevates their fifth effort to a vantage point above their previous releases.

As with so much of the music that’s been written and recorded in the eves of a global pandemic, songs of domestic anxieties hold a new, prophetic revelation. Plum is an album of two subtle halves; the four singles released in advance cluster into the first five tracks, confident in their easy-going, breezy dream-pop. The often-made comparison of Molly Hamilton’s dusty, honey-sweet vocal to Mazzy Star’s Hope Sandoval has never sounded truer than on ‘The Good Ones’ and ‘Breadwinner’, spread deliciously across Robert Earl Thomas’s pronounced guitar thrum with a gloopy, nylon reverb. The sound is dreamy and limber, the content is practical, caring advice (“Baby you’ve gotta quit that job ‘cause your boss is a jerk”).

The sweet centre breaks with ‘Even True Love’. From hereon in there’s a soft patrol of the album’s outer edges like a search party combing folk music’s beautiful aesthetics for the catch at torchlight. Uneasy guitar twists through ‘Amy’ and ‘Sure Thing’ with a teasing goth-rock prospective; it’s music for the uncomfortable café, doubting its previous counsel. The hushed sweep of Terry Riley-inspired ‘Jeanie’ and ‘Y2K’ is some of the most gorgeously electronic-minded music Widowspeak have made. Hamilton’s own self-doubts replace her assurances, reframed over deep, luscious piano, waiting for a truth that doesn’t come: “I could save all my money / I could spend it all / pay to climb a mountain / and fall”.