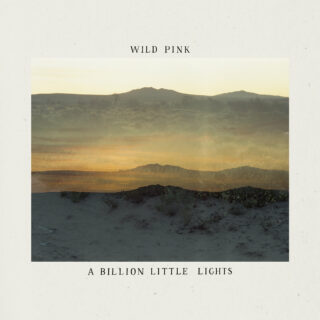 Wild Pink’s ambition has been steadily building over a handful of releases. Each whispered chorus, warm swell of pedal steel and understatedly profound lyric adds on the last. Vocalist John Ross has never had to raise his voice to connect, and even as the band aim for universal catharsis on A Billion Little Lights, they remain rooted in quotidian appeal.

Their last album Yolk in the Fur had a more obvious leap in stakes from their especially understated debut. The growth here is more ephemeral – a more textured synth layer here, a busier arrangement there. When a string passage or a saxophone solo do pop up, they’re gauzy and distant, like a memory of the great Americana anthems the band are so influenced by. The seamless transitions that gave Yolk in the Fur such a great flow also return, and while other bands might hit you over the head with a holistic approach to sequencing, Wild Pink let these moments breathe.

The band put in effort to smooth out the experience, but what shines through are the songs themselves –  beefed-up slowcore lullabies that feel familiar and affirming. ‘Bigger Than Christmas’ captivates even while waiting four minutes to give us a full drum beat. ‘The Shining but Tropical’ is the boldest track here, with its fractured and fuzzed-out organs and stadium-sized stomp. For better or worse, the band are reading from the indie rock playbook to create chills.

Wild Pink started off by making small scale, meditative versions of songs you might envisage being blasted at a football field, and A Billion Little Lights ups the scope without sacrificing their central pensive nature. It’s a comforting listen, but safe doesn’t have to mean boring, which is fitting for a record that attempts to find solace in the everyday.