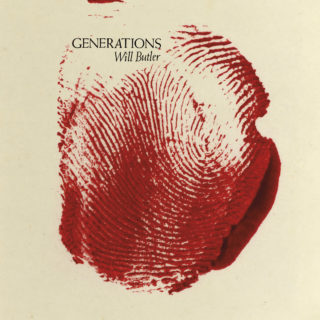 Will Butler of Arcade Fire has had a busy few years, between tours, grad school, raising three kids, and writing a second solo album. Generations is a meditation on Butler’s place in society and history. According to Butler, “A big chunk of this record is asking: What’s my place in American history? What’s my place in America’s present? Both in general…but, also extremely particularly: me as Will Butler, rich person, white person, Mormon, Yankee, parent, musician of some sort, I guess.”

The album, while showing Butler’s technical prowess, makes it clear that the musician doesn’t necessarily think of himself that way first and foremost. Instead, he’s one person in a wider context – so what does that mean for his interactions with society?

The album starts out strong, with a time-warp of songs in classic and garage rock, with sonic allusions to past acts who have centred social issues in their work. ‘Bethlehem’ briefly enters U2 territory, but its strength lies in the energy seeping out of every beat, from screaming organ to screeching vocals to the electric, dance-worthy rhythm section.

Things falter slightly with two tracks that interrupt the flow of the record. The chaotic indie-folk ‘Surrender’ and tepid disco of ‘Hard Times’ are confusing songs with unclear meanings that could have been left out.

Though a simpler song, ‘Close My Eyes’ has a ’70s kick to it, and is one of the strongest on the album. The backing vocals create a powerful sense of community relevant to Butler’s mission in finding his place. At the end of the day, no one individual matters unless you take into account the other lives he’s touched, or been touched by. If Butler is dealing with the question of what place he has in America’s history and present, he need look no further than the people around him — fans, friends, family — to know his impact.