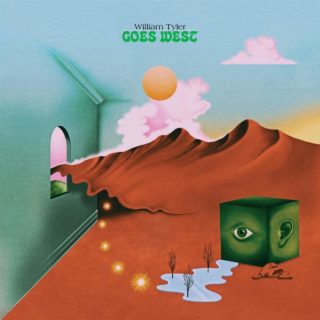 William Tyler’s last album, 2016’s ‘Modern Country’, much like the two before that, was a nostalgic ode to the kind of Deep South where he grew up, all huge skies and open fields, bucolic and spacious and kind-hearted. Written before Donald Trump hijacked American politics, but taken on tour after Agent Orange moved into the White House with the help of much of Tyler’s homeland, the guitarist admitted during gigs that “I was romanticising the South, but actually I should’ve been terrified of it” – and while a lot of his fourth album of pastoral instrumentals for guitar sticks to the same tried-and-tested widescreen elegiac melodicism, this time an uneasy sense of suspicion peppers proceedings.

Extended opener ‘Alpine Stars’ establishes the sort of gambolling gait and tunefulness you could ride a horse through, before abruptly changing pace and spirit, with Tyler throwing in harmonic clashes where before lay perfect, soothing consonance. Similarly, ‘Venus In Aquarius’ presents initially as an easy-going prairie jaunt before retreating into the minor key and washing the backdrop with duskily sinuous synths. Elsewhere, though, Tyler plays to type, and beautifully so: ‘Man In A Hurry’ is precisely the opposite, and ‘Rebecca’ is an aching, lovelorn musing full of twinkling harmonics and exquisite country guitar tones.

The combination of both songwriting forms makes for Tyler’s most satisfyingly three-dimensional album to date: he may have upped sticks and gone west as the title suggests, but that distance has imbued his interpretations of home with poignancy, clear appreciation, and newfound depth.