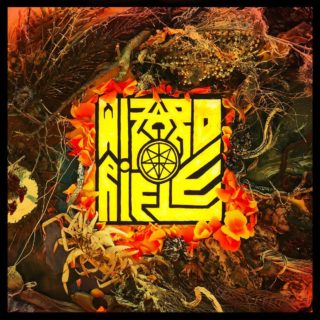 When you’ve had as many false starts as cool doom-bros Wizard Rifle — 2014’s Here in the Deadlights being from as long ago as the Obama administration — your first record in five years has to go hard or go home — and doubly so if you’ve decided to go self-titled.

The trio may be down to two with Wizard Rifle, sparing bassist David Bow the move from Los Angeles back to their native Portland, but the magnitude of racket guitarist/vocalist Max Dameron and drummer/vocalist Sam Ford can summon together goes a long way to even out the scales, and the inner, prog-adjacent workings of each of these five fearsome tracks — four over seven minutes, one over 12 — show the duo haven’t lost sight of their grand design.

Their customary breakneck pace is set with ‘Rocket To Hell’, an apocalyptic rallying call if Wizard Rifle ever had one, matched by ‘Caveman Waltz’ in terms of infinitely memorable breakdowns (“I need more alcohol / I need another Adderall” intimates Dameron). Epic centrepiece ‘Funeral of the Sun’ evolves from gloomy dirge to death-defying post-metal heights, and could well be the group’s crowning achievement.

Fine, gear-changes aren’t as smooth as those on Deadlights, where you’ll find the glimmering, the gnarled and the heavy seamlessly weaved into a tight five. But what that album lacks (in-the-room intensity, from the comfort of your living room) Wizard Rifle has in spades, tactfully leashing up the riotous intensity of a live show, as befits a group of this much energy. Go hard or go home — Wizard Rifle show it’s possible to do both.