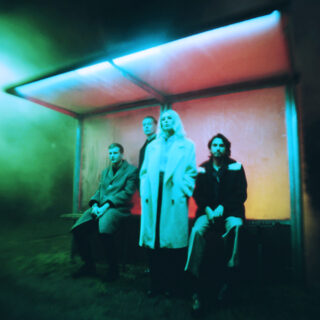 On Blue Weekend, the much-loved London band Wolf Alice provide a worthy follow-up to their Mercury Prize-winning second album Visions Of A Life. Producer Markus Dravs is a frequent collaborator of Arcade Fire, and here he has helped Wolf Alice hone an expansive yet intimate sound reminiscent of the Canadian group, and fitting for the huge stages the band are now accustomed to playing.

The formula remains largely the same – singer Ellie Rowsell’s subtly raspy vocals and confessional lyrics buttressed by the grungy indie pop they made their name with – although there are efforts made to deviate from this, with varying success. The catchy, ’80s-tinged ‘How Can I Make It OK?’ is reminiscent of Haim, in the best possible way, but the saccharine ‘Safe From Heartbreak (If You Never Fall In Love)’ and pastel punk ‘Play The Greatest Hits’ seem to lack conviction, on an album which otherwise packs an emotional punch.

The best Wolf Alice songs (‘Bros’, ‘Don’t Delete The Kisses’, ‘Silk’) have always hinged on an ability to capture an experience in all its emotional complexity, whether that be friendship, partying, or falling in love. This hasn’t changed, and even if the experiences themselves have become less relatable, there’s a stark honesty to Rowsell’s storytelling which makes up for it. A perfect example of this is ‘Delicious Things’, which finds her ruminating on life in LA, equal parts glamorous and isolating. Elsewhere, she advocates for ‘self love’ on ‘Feeling Myself’ and takes on sexist critics on ‘Smile.’ The highlight though, is single ‘The Last Man On Earth’, an epic and ambitious song which points to how far Wolf Alice have come, and is sure to be breathtaking live.