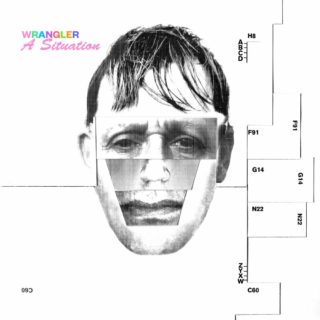 Given their impressive CV, combining members of Cabaret Voltaire, Tunng and The Maths, Wrangler‘s third album is unsurprisingly an expansive and well-designed listen. Their MO has always been to use old equipment to create something new, and that theme of building with old parts continues here. A Situation excels when it sounds like tiny people constructing the songs inside your speakers; the whirring drills on ‘Machines Designed To Eat You Up’ and the flickering noises of the title track give the impression of creative people crafting together. It’s engaging and fun, the band wringing the concept for all it’s worth.

Yet their insistence on limitations seemingly bleeds into the songwriting, which often feels safe. Vocals are masked with reverb and distortion to give the effect of HAL-9000 covering The Smashing Pumpkins, which sometimes gives intriguing depth (‘Anarchy of Sound’) and sometimes just sounds silly (‘Knowledge Deficit’). And oddly for an album so obsessed with process, it’s at its best when things sound uncontrolled, when the hats rattle or the distortion clips, which I wish it did more. It’s an album that is half way between a Boiler Room set and a launchpad falling down the stairs, peaking when it’s the latter: a scrappy futurist rumination.