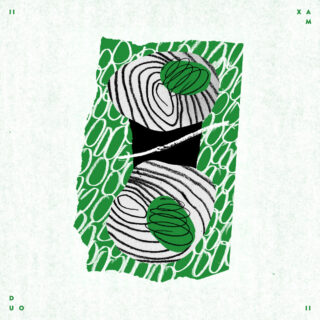 Yorkshire-based songwriters Matthew Benn and Christopher Duffin have been collaborating as XAM Duo since 2015. Although both are closely associated with the Leeds DIY scene that produced the likes of Hookworms and Yard Act, this project is far removed from the guitar-driven style of those bands; instead, its creators tinker with a style of electronica that echoes acts like Autechre and James Holden.

Now with some years in the game, the pair are releasing their second LP, simply titled XAM Duo II, a concise listen whose six tracks clock in at less than 30 minutes. Made up of sweet synths, precise beats and some piano and sax, they create an atmosphere that feels as if it’s designed to accompany times of concentration and calm.

The groovy opener ‘Blue Comet’ (playfully named after an episode of The Sopranos, like many of their songs), delivers a tight rhythm with wonderful percussion, making for one of the duo’s most addictive offerings to date. Elsewhere, ‘The Middle Way’ is reminiscent of Mort Garson, with its floaty melody feeling like the soundtrack to a transcendent underwater video game.

Though self-described as “emotional computer music”, XAM Duo II doesn’t quite land an emotive punch, but still creates a soothing and focused vibe that is recommended listening for those who like their electronic music on the ambient side.