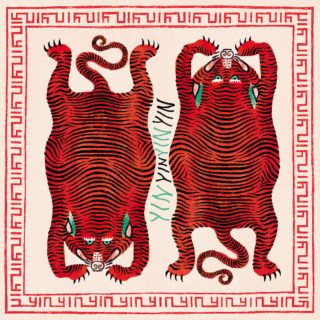 The Rabbit That Hunts Tigers is the very curious debut album by Maastricht based psych band Yin Yin, wherein the Dutch four-piece locate themselves in the middle ground between psychedelia, disco and more traditional South-East Asian tones and tunings.


Following Maastricht scene figurehead Yves Lennertz’ discovery of The Sound of Siam, a compilation of Thai guitar music, he was compelled to found a band of razor tight psychedelic voyagers with Kees Berkers of YAYAYA. The result of this, The Rabbit That Hunts Tigers, is a mixed bag, but does see them spark occasional gold as their propulsive psychedelic charge melds with the hypnotic Asian twang that influenced them so.


Title track ‘The Rabbit That Hunts Tigers’ combines these faraway tones with the Stetson sling of The Shadows; a gap year Hank Marvin excursion; quite often these Eastern tones mangle with the sprawl of Western scores in very satisfying matrimony. Meanwhile ‘One Inch Punch’ sees the guitar dizziness escalate, atop a fairly laid back disco beat, the band’s signature guitar tones benefiting from a gratifying call and response frenzy.


However, Yin Yin’s shtick does become ultimately fatiguing after a while of active listening. They have a fairly fresh signature sound that they’ve mastered, but with minimal lyrics and little in the way of dynamic range, there is simply too little on The Rabbits That Hunts Tigers to keep interest kindling over the course of a whole record.

Urban VIllage's music is in constant dialogue with their forefathers