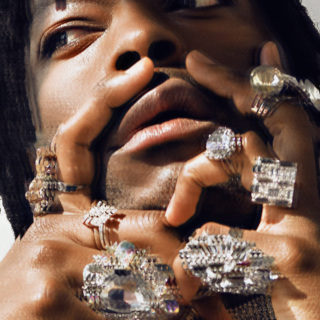 Early tracks ‘INTRO TO LESS’, ‘ISH’ and ‘LOUSY’ serve as potent warnings: taut with an unstable, macabre energy and cavernous beats which regularly explode with a disorientating fuzziness. All the while Katz’s composed flow proclaims his intention to keep the dance floor jumping. By fourth track ‘BLUSH’, Katz’s lurid grooves are decidedly off the rails, emitting an ominous intensity like a chthonic Faithless.

From hereon in, the album goads you into dancing like moribund Saint Vitus victims with the infectious up-tempo swing of ‘IN IN IN’, the eviscerating drum ‘n’ bass ferocity of ‘ZAD DRUMS’, the brooding, HEALTH-like ‘MONITOR’ and the industrial-driven ‘MOOR’ on which Katz’s flow briefly disintegrates as the nocturnal chaos consumes him in carnality and comedown paranoia.

The fabric of this middle section is unsettlingly versatile, as Katz contorts it with an occult majesty. His lyrics expertly oscillate between fleeting hedonic fervour and pointed societal rage to fuel an insidious, isolating sound.

‘NECKLACE’, an acoustic cut, comes as a much-needed reprieve that showcases Katz’s tenderness, momentarily lifting the pervasive darkness before entering what feels like a satisfying closing stretch: the pulsating drive of ‘SLEEPN’, the sonic avalanche of ‘NO 1 ELSE’, and the cathartic ‘UPP’.

Unfortunately, the record hangs around a couple of tracks too long, with the incongruently ebullient ‘LICK IT N SPLIT’ and gratuitous ‘EXIT 2 VOID’. This marginally nullifies the record’s impact, but it’s otherwise an accomplished, confident, and virile work.