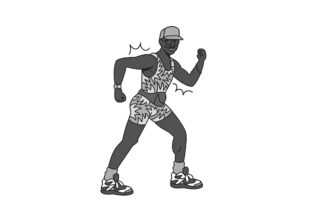 It used to be that we lived in caves. We feared our neighbours because they might eat our brains, so we killed them. We chased animals and killed those too. Life was hard. But boy, did we have great abs!

Now we shelter in houses instead of caves, and fear our neighbours for their germ-spreading rather than brain-eating tendencies. But our abs? They are nowhere to be seen, destroyed by our love of all things baked, fermented and sucked out of animals.

Luckily, a saviour was sent to help us recover those lost abs. A man with warm, chocolate eyes and soft, bouncy hair. A man who looked a bit like Russell Brand but was even more annoying. A man named Joe Wicks.

Over the last few years Joe Wicks has become unavoidable. He’s in shops, staring at you from the front covers of books while brandishing root vegetables. He’s on breakfast television, sitting on the sofa like a well-trained poodle. He’s on your computer screen, jumping around and shouting in his unconvincing cockney accent. He’s inside your head, and he won’t leave until all of the crisps, cheese and grease are gone; until you are one giant, pulsating abdominal muscle.

But Joe Wicks is more than just an annoying man. He mirrors our ambitions, our lusts and our vanities. Each time he holds a head of broccoli in his hand and says “Cor blimey!” it means something. To understand Joe Wicks is to understand ourselves. But before we can, we must first look back into the past, to the people that created our modern fitness messiah.

Ever since our ancestors realised that horses weren’t just potential sex partners but could also be used as transport, humans have been growing fatter, and fitness coaches more popular. However, fitness gurus in the modern sense arrived with the advent of radio.

Joe Murgatroyd launched his radio show in the UK in the 1930s. Laughing maniacally throughout – his programme was called Laugh and Grow Fit – Murgatroyd presented fitness as a way of suppressing emotions and avoiding imminent death. Given that life expectancy at the time was about 55, and that crying was considered treason, Murgatroyd represented the repression and uncertainty of the age.

The first TV fitness gurus arrived in the US in the ’50s. They had exciting names like Jack LaLanne and Debbie Drake, while their bodies bulged and curved like Googie sculptures. Meanwhile in the UK we had Eileen Fowler, who promised that women could “stay young forever” so long as they did plenty of bouncing. Fowler was symbolic of a country rediscovering its confidence after a decade of rationing and loss of international prestige.

The next big thing in fitness came in the ’80s with the advent of the celebrity home workout video from people like Jane Fonda. They sweated power, money and confidence, and sold you a dream: that you too could be a rich, famous actress with a mansion. In the UK, we were more realistic in our choice of idols. Instead of Jane Fonda, we had Angela Lansbury – the voice of the teapot in Beauty and the Beast – whose video Positive Moves claimed that “there’s something to like in every body”. Clearly, Lansbury had not seen many British people with their clothes off, which is just as it should be.

Then in the ’90s the UK finally got a fitness guru we could be proud of: Mr Motivator. Real name Derrick Evans, Mr Motivator wore colourful spandex onesies and shouted at us during breakfast television. Sure, we were too busy stuffing our faces with Frosties and Pop Tarts to actually exercise, but Mr Motivator made us feel like we were getting healthy. And, as the ’90s proved, feeling that something is good (Britpop, New Labour) is almost the same as it actually being good.

The 2000s brought a darker aspect to fitness. Now it wasn’t enough to get healthy – you had to get really unhealthy first. So celebrities would eat and drink themselves to the brink of destruction, spend three months starving and exercising, and then release a fitness DVD in time for Christmas. This yo-yo approach was emblematic of a decade in which confidence and paranoia took equal turns at the helm. We are a world power! (So let’s invade Iraq) We’re total idiots! (Goodbye Northern Rock). Needless to say Jade Goody – who was on Big Brother in 2002, launched her own perfume in 2004, was kicked off Celebrity Big Brother for racist bullying in 2007, and died tragically of cancer in 2009 – had her own fitness DVD.

Today we’ve reached the era of Instagram and Joe Wicks, where fitness isn’t about being fit anymore. Instead, your abs are an essential fashion accessory, part of your brand. We have “wellness goals” and exercise programmes with militaristic names like XTFMAX, P90X and FOCUS T25. Your body is a fleshy enemy that must be vanquished by the forces of vanity. As the world disintegrates around us we retreat into the security of knowing we have a really nice arse.