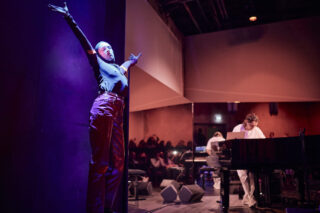 A special evening at the city's Palais de Toyko

The term ‘oceanic feeling’ was coined by the French writer and composer Romain Rolland in a 1927 letter to Sigmund Freud. He described it as, “the sensation of eternity, a feeling of being one with the external world as a whole”.

Who among us wouldn’t want to have an ongoing relationship with the oceanic feeling? Koki Nakano certainly does: the Japanese classical composer and pianist has been making music for some years that explores the connection between motion and sound, and how music and dance in conjunction can evoke or entice a state of mind that breaks free from the everyday physical limits of our reality.

His 2020 album Pre-Choreographed centred on the subject, and his newest release, titled Oceanic Feeling (out 13 May via No Format) explores it further. Tonight, at the lustrous Palais de Tokyo arts complex in the heart of Paris’ 16th arrondissement, Nakano brings Oceanic Feeling to the stage for the first time in an immersive, multi-sensory environment that is laser-designed to allow the audience to access the one-ness that Rolland described.

Nakano’s playing style itself is an escape: he behaves on stage like a one-man piano band, reaching deep into the innards of his instrument to draw percussive, rhythmic sounds from the piano’s very frame and body. He is an animated player, his face contorting in line with the music, his body in thrall to the moment. If the goal of the album’s concept is for one to lose one’s sense of socialised self-awareness, then it would appear to be working.

He plays pieces like ‘Birth Canal’, a composition that imagines the unimaginable freedom of a newborn baby, unconstrained in its physical movement for the first time, a sensation that is as liberating as it is terrifying. Nakano is acutely aware that total escapism is not possible, and his music represents the irritation and disappointment of failing to meet the ideal with the same honesty and beauty as he addresses the majesty when it is achieved. 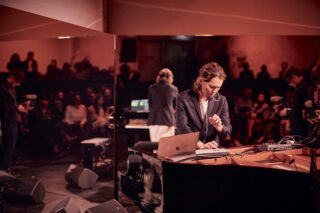 ‘Port de Bras’, the piece named after the flowing arm exercise in ballet, paints the sonic equivalent of a dancer fluctuating her arms underwater, the piano notes rippling like the pulses of water that move around her. It is at this point that the first of three dancers planted in the audience (Marion Morin, Nicolas Huchard and Mourad Bouayad) rises to their feet and a blue spotlight falls upon them. The attentions of audience members fall on the dancers gradually, as the theoretical physical dimensions of Nakano’s playing become manifestly literal. Their bodies move like our minds wish ours could as we listen, the distinctions between headspace and bodyspace rendered invisible.

There are tensions in our bodies at virtually all times: discomfort, social awkwardness, fatigue. Nakano is not just looking to break free from those tensions, but he is looking to resolve them with his music. With his set tonight, the audience’s minds turn away from the everyday stresses of being stuck in a human body, and are invited to imagine how a heightened awareness of their body can actually bring a sense of euphoric, natural calm.