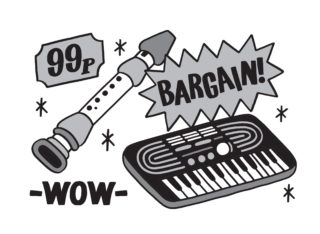 So the good news is that it's still possible... kinda

Most of us have, at one time or another, dreamed of being a successful musician. Playing to huge crowds, appearing on the covers of magazines, having a tour bus – it sounds pretty good. As Nickelback elegantly expressed it, after just 11 years of being Nickelback, “we all just wanna be big rock stars.” But how do you make this happen?

In the traditional model you sign a record deal. You live off the advance, then make a regular income once sales reach a certain figure. You supplement this with money from gigs and merchandise.

Here’s why this doesn’t work anymore: getting signed is expensive. You might write tons of cool songs, but unless you’ve got thousands of likes on Facebook you won’t get booked for big gigs, so labels will never hear you. To get these likes you’ll have to play loads of shitty DIY gigs where the price of the taxi and the beer will be more than what you take on the door. Or you could pay Facebook to promote your page, which costs a fortune to have any effect.

Even if you do get signed chances are you won’t get rich. Labels have drastically reduced the advances they pay out, so you can’t live off it for long – especially if your band has several members. And you can’t use that money for food: there’s recording costs, music videos, PR and hundreds of other band expenses to be met. Worse, this money is really only a loan: you’ll be expected to pay it back in sales. And if you don’t? Best not to think about that.

Luckily for you, I’ve prepared the following guide that will allow you to become a professional musician in 2018. Probably.

If you’re in a band, begin by firing all the other members. They might be great musicians and fun to hang around with, but do you think a record label or promoter will pay you more just because there are five of you? Of course they won’t. Ditch them now. Go on.

The exception to this is if you’re in a band with your significant other. Firstly, it’s not realpolitik to fire your partner – even if you do show them pie charts and expense reports to explain the decision – and secondly, being a couple in a band can be cost effective. You can huddle together for warmth, take turns raiding the headliner’s rider and, since you’ll be spending all your time playing gigs, you won’t have to spend money on cinema tickets, restaurant meals or therapy.

If you have a child, recruit them too: they bring in much needed government benefits and can work the merch table.

Guitars, drums, bass – not only has it been done before, but these are also very expensive instruments to buy, maintain and transport. The cheapest new drum kit out there costs £200 (and sounds shit), while a packet of guitar strings is six quid a pop (for fuck’s sake).

Instead, I recommend the recorder. It’s priced at less than a tenner, is easy to learn and can be transported inside your coat or trousers. As an added bonus, the recorder gives you instant avant-garde credentials. Or, if you’re going for that full-band sound, why not try a keyboard? A Casio SA46 can be purchased for just £29 and has all the tones and beats – from Latin to world, to rockjazz – you’ll ever need.

If you do insist on having a guitar like your hero Johnny Borrell, play with only down strokes to reduce string wear. You may be tempted by synths, but these are for rich douchebags.

The ideal solution is to live at home with family. This will avoid rent and provide you with food, drink and toilet paper. If you have no such family, force yourself onto the sofa of a timid friend – you’ll be surprised how much their natural aversion to confrontation will let you get away with. If you’re attractive and charming, have as much casual sex as possible and benefit from free room and board.

If you have no friends, family or sexual potential, you may be forced to rent a place. This isn’t necessarily a disaster, as you can make extra money by subletting your bathtub as a bed on AirBnB. The cheapest cost of living can be found in North Scotland, but since no one lives there it’s not ideal for an audience-based business. Rather, I’d recommend Burnley, which is very cheap (average rent is just £400pcm) and close to major metropolitan centres.

Under no circumstances should you try to live within a 75-mile radius of London.

As for buying a house, let me make this clear: as a musician, you will never own a house. Ever.

It would be nice to gig at The Roundhouse, Manchester Academy or Download Festival, but opening slots at such places are notoriously poorly paid – sometimes as little as £50, even if you’re playing to hundreds of people.

A far richer seam is to be found in local pubs. Function bands make £200-£1,000 a night. The caveat is that you have to play covers, but then again so did The Beatles. The Casio SA46 really comes into its own here as it has many famous songs pre-programmed – all you have to do is hit play.

Congratulations! You are now a paid musician with a sustainable lifestyle, ready to be embraced by society.

How much money can you make from an awards ceremony?

The digital music war is over – coffee is just coffee again