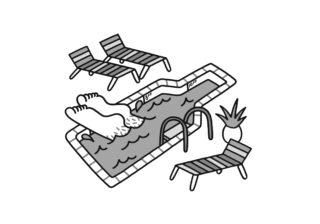 Hanging out with a classical minimalist heartthrob

Words by Tristan Gatward Illustrations by Kate Prior

Seven Days Walking: Day One is the fourteenth studio album by classical minimalist composer Ludovico Einaudi. By the end of the year he’ll have released his twentieth. It’s the kind of productivity that makes you question why you snoozed your alarm twelve times this morning. But replacing the warm wet air of the London Underground with the warm dry air of the Italian countryside, his hometown of Dogliani in Southern Italy adds some grounds to the mammoth new project from classical’s suavest export.

It’s true: in the Venn Diagram of guilty pleasures and heartthrobs, you don’t expect to land two-footed in the subsection with an Italian composer and pianist in his early 60s. But where we are in Piedmont, the allure among all the world’s tranquillity seems to make sense. Concentric lines of carefully cultivated grape vines snake through the rolling countryside. We’re lounging in semi-comfortable wooden chairs while crisp brown leaves float in a swimming pool shaped like a wine bottle. Ludo’s luscious grey sideburns twinkle as the sun bounces off the blue waters. Slowly removing his navy crew neck sweater, he slips into something more comfortable. A full wetsuit and scuba flippers? I’ll leave that to your imagination. Goggles, for sure. He takes a brief run-up through the brittle sage hedges and executes an elegant swan dive into the sparkling waters. Not all of this happened.

Even between the competing landscapes of high-flying contemporary classical and shady purists who use emojis in online Hi-Fi forums, neither camp seems to accept good old Ludo as one of their own. He’s the most-streamed classical artist of all-time, but nobody seems to like that. He’s the catalyst behind your favourite streaming service’s Peaceful Piano playlist. He wrote the piece your friends walked down the isle to last weekend; the one from a BBC montage. How dare he come over here with his stupid compositions and stupid minimalist song-structures and stupid melodies that all just sound so stupid good. But that liminal space between pop’s catchy sensibilities and classical’s illusion of high-brow has always been bridged with something a little less revered. It used to be Bocelli, singing ‘Time To Say Goodnight’ to Elmo on Sesame Street. Now it’s Einaudi, with a project that’s actually really interesting, and one that doesn’t involve offering some oily garlic bread to a puppet.

Walking with Ludo through his vineyard, he talks about the same route he took on seven different occasions that inspired this new collection. During a snowstorm in January 2018, view completely obscured. In the penetrating Spring air, nose-a-streaming. In an Autumnal colour palette. You know, how seasons are different, and that. One day it’s windy, he says, on another day you’ll meet someone and on another you’ll discover something on the hillside. As he says this, he leans over and eats a handful of small flowers plucked from the grassy verge. It’s a type of Primrose and tastes great on a salad. The ideas from the walks connected him back with traditional forms of classical music, where suites and variations tease around a common route, with different surprises to face each time.

“I like the sunny days,” he says, “but it’s also nice to get lost in the snow. It’s such a beautiful feeling when it’s snowing so heavily that you almost disappear.” After four days of recording with his collaborators Federico Mecozzi and Redi Hasa, these seven musical walks had been recorded, starting from one place, circling around and ending back at the beginning. There was a different feel to each; there were slower passages; gaps of silence; experimentations into electronics. He said it was like looking out of the same window over the course of eight hours, noticing the different patterns of light. Like Cezanne painting the same mountain in France for twenty years.

At the Teatro Sociale in the neighbouring town of Alba, I watch him air these variations for the first time. The stage sits curiously in the middle of the old and the new part of the theatre, facing two audiences at once. There is not a typical Einaudi fan. He’s got all ages covered from all walks of Italian life. As he thanks one half of the audience for their applause and warm reception, the other half falls silent. He knows the peculiarity of the space; it suits the curiosities you’ll find in the music that follows.

At the end, I tell him I love the lyrics and ask if he’s heard of King Gizzard and the Lizard Wizard. He gives a humouring smile and nods. Back at the villa, his videographer infuses some boiling water with the sage from his garden – a fresh and cleansing drink. Einaudi branded wine bottles stack the bookshelves of his house, and the wine cellar that sits conveniently underneath the swimming pool looks like an architect’s design from Thunderbirds. Someone explains that the microorganisms in the grapes like to listen to Ludovico’s music to chill out. This has been scientifically proven. Who am I to disagree? It tastes delicious.