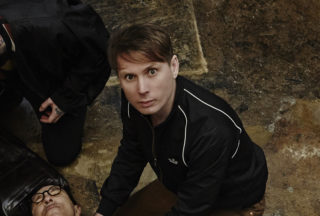 The Franz Ferdinand singer completes out Getting To Know You questionnaire

Eleven years ago Franz Ferdinand released ‘Take Me Out’ – the most danceable, perfect indie-pop single since ‘Psycho Killer’. Shortly after its release in January 2004, Franz met ’70s art-pop duo Sparks and agreed to make an album with them. They finally got around to forming FFS last year, with their debut LP due next month.

Stop thinking about it so much.

Running my hand over a clean surface to discover that a jammy knife has rested there.

It started off as the best job I’d ever had. It was called Terror Under The Arches and I worked alongside a lot of out-of-work Gaelic TV actors and Satanist Goths in a sort of Haunted House theme show, where people would be lead round spooky rooms where various creepy things would scare them. I mainly played the part of a Chainsaw Wielding Maniac. Wearing an orange prison jumpsuit and a muzzle, I’d wait until the already-terrified punters were gathered in a grotesque cell with a faintly flickering light bulb. When their anxiety had built to a peak I’d scuffle about, making a few guttural grunts, then pull the chord on my chainsaw, coughing it into life. I’d then burst into the cell, wide eyed and revving the saw as hard as it would go, two-stroke smoke stinking out from the exhaust. The chain had been removed, but they didn’t know that. It was very real. They’d all panic, scream and clamber over each other and run out into the lane at the back of the Arches in abject terror. They loved it. I loved it. I couldn’t believe my luck: I was getting paid ten quid an hour for this. It was a total laugh for the first couple of weeks, but the repetition really began to wear. It became boring. Then it felt like the most futile activity I could imagine. The arches were damp and as winter drew in, my asthma really began to play up. I’d be wheezing away, pulling at this chord, wondering what the hell I was doing with my life. We’d work shifts and the other Chainsaw Wielding Maniac seemed to be taking it all a little too seriously and immersing himself in the role a little too deeply. One January morning, I pulled on my jumpsuit at the start of another shift and it was cold and still soaked in the sweat from the previous day. I heard the punters gathering in the cell. I pulled on the cord. Nothing happened. I pulled again. Nothing happened. And again. And Again. We were supposed to always fill the chainsaw with petrol for the next Chainsaw Wielding Maniac, but the previous guy hadn’t bothered. I could hear the punters getting restless and less anxious. I ran into the room waving the dead chainsaw. They stared at me, perplexed, but definitely not scared. I stared back in a petty existentialist standoff. It was me who gave in. I dropped the saw and it was me who walked out into the lane, instead of them, never to return.

Back to the Future.

Where the three glens meet.

My granddad. He was a very well-dressed carpenter.

Other than other musicians, Will Smith probably. He seemed alright.

I took a girl to Dunkin Donuts. She wasn’t impressed.

I don’t feel guilty about anything that brings me pleasure.

My Telecaster Deluxe. It was the first thing I’d ever bought on Ebay and bid on it when I was drunk for £666. It was more than I’d ever spent on anything in my life before and I couldn’t afford it, but it was worth it.

I can make my eyes spasm and vibrate violently. It looks pretty cool, but it gives me a headache for days afterwards.

I made myself a pair of tweed trousers once. It took days. I’ve had them for about sixteen years and now only wear them on very special occasions.

Realising that I was probably never going to travel through time except forwards, at the same rate as everyone else.

Spiteful idiots with power and weapons.

That I am an extrovert.

Pulling the chord and there’s petrol in the proverbial tank.

I wish I was a better carpenter.

Quickly, painlessly, unexpectedly and spectacularly in about sixty years time while addressing the UN. Again. But this time from space.

I’ve never been able to grow proper sideburns, as there’s a gap between my beard and hairline. It irks me less now than it did as a teenager.

Carry on, but get laid.

Be excellent to one another.