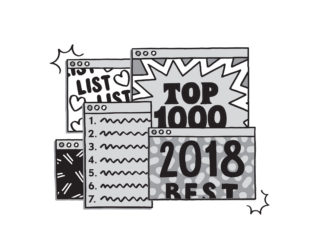 Us music obsessives love lists. We might not have a sexy site like the film buffs do over at Letterboxd, but if you’ve found yourself on the productivity-sponge called Music Twitter this summer, you’ve probably seen a few users proudly listing their favourite albums of 2018 so far. It’s a ritual come the halfway point. Some take it very seriously, writing multi-part threads, complete with playlist links and mini reviews, read only by other obsessives and enabling friends. Ranking and labelling music is a time-suck if you’re going to honour every release you’ve heard, and a downright chore if you want to do it numerically. Like Trainspotting (both the hobby and the heroin metaphor), it’d be easy to wonder why music nerds bother doing it if you’re on the outside.

For me, it’s about connection. Reading through other people’s lists might give me a warm feeling of relief when my own picks are reflected, or a migraine when they’re not. I might get a treasure trove of albums to dig through, or I might never think about the #1 ranked mixtape by 03 Greedo again. Either way, I’m going to get the sense of what it was like to be another music listener over the past few months. As niche music communities become increasingly online and amorphous, those quarterly blocks to reflect on the best stuff emphasises the feeling of community and the deeply personal nature of music.

Publications love lists too, and that’s largely because the nerds love them. We can’t help ourselves. Even if you’ve written something as banal as the Top 10 Bananarama covers, a fair few of us are still going to be clicking. It’s comfort reading and easy ad revenue. What’s wrong with that? Well, the last few years suggest that we might have reached peak list. Last month, Rolling Stone released their picks for the Top 100 songs of the century so far. (‘Crazy in Love’ is number one. It’s not ‘1 Thing’ by Amerie, but at least they didn’t pick a U2 song or something). They’re very proud of this list. There’s an extensive ‘making-of’ article that catalogues who was behind its creation, and they used it to push their shiny magazine redesign. I didn’t get a warm feeling of relief or a migraine from that list, and that’s because I’ve read it before.

Rolling Stone have done a lot of these. There’s a whole section of their site dedicated to it, from the specific Top 25 Country and Americana albums of 2018 so far, to the overarching, like the best of a whole damn century. They’ve done the best of the 2000s, and each individual year since, stopping to spotlight their favourite acts with their own listicles. As personal, thoughtful and contrasting as the writers are in their individual blurbs that accompany each song, it’s hard not to see the latest list as a Frankenstein monster of all the ones they’ve done before.

They’re not the only offenders. Everyone from Pitchfork to Consequence of Sound have given you their own picks for the best of the year so far. Everyone is fighting to be first. NME decided to publish theirs all the way back in May. No doubt, the overall lists will pop up before you’ve even got your Christmas tree up – in previous years, late contenders like Run the Jewels and D’Angelo were left out of the conversation entirely because of it. On the flipside, publications now break their lists down by genre, which could be seen as highlighting albums that might otherwise get left unappreciated, or milking as much as you can out of an easy format.

We’ve reached list fatigue, and that’s perhaps the fault of the framing of a listicle itself. Ann Powers perhaps put this best writing for NPR: “Beyond getting the groceries, lists are fundamentally lies. They reflect unconscious biases and whispered compromises; they solidify beliefs that may seem relevant in the moment, but become incomprehensible to the next generation.”

Rolling Stone essentially invented the music canon with their 500 Greatest Albums of all Time list. Whether it makes you wince or not, there’s no doubt that they helped establish the pop standards, and we’ve been living in the shadow of that list ever since. The beneficiaries of the Beatles, the Beach Boys and Bob Marley are forever thankful. What’s just as important as what’s on a list is what’s left off it, as powerfully demonstrated by Powers, as part of a small group of writers working for NPR, who last year decided to come up with their own alternative canon, of 150 albums written and performed by women, called Turning the Tables.

“Before canons are handed down, someone has to make them,” they assert. “The atmospherics around that consecration tend to default to masculinity because the mechanisms that do the consecrating are overwhelmingly male.” Going through each pick was exhilarating, with firm favourites and wonderful surprises to be found. It’s a list with a point to make, one that captures the joy of embracing a numerical canon while questioning the procedure itself. It reminded me that the standards of music journalism can be more than just standard, that even with something as tired as a listicle, we could be giving our readers community.

Shame’s Charlie Steen – Growing up in a band