Héloïse Letissier will be supported by Metronomy and Maribou State

The third headliner for 2019’s All Points East festival has been revealed – Christine and the Queens.

Héloïse Letissier will top a bill at London’s Victoria Park that will also feature Metronomy, Maribou State, Beach House, Honne and Kurt Vile and the Violators.

Tickets will go on sale at 9am on Friday 7 December.

Of the 10-day takeover, two days have previously been announced. The Chemical Brothers kick the run off on Friday 24 May, with Bon Iver bringing things to a close on Sunday 2 June. 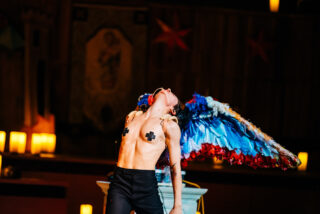 Redcar, aka Christine and the Queens, allowed our imaginations to run wild in London last night