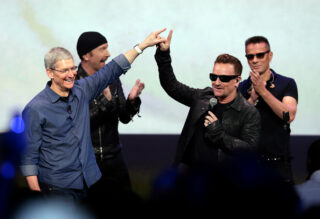 Back In 2014, U2 and Apple joined forces for their most irritating album release/spam campaign yet

Your alarm goes off. It’s the second one of the morning, and this one you can’t ignore. 7:30am, time to get up.

You open your phone and try to focus on the screen. Check your emails, nothing interesting. Not much happening in the news either, just stuff about the Scottish independence referendum. You pull up iTunes – maybe music will help.

You look again. There must be some kind of mistake.

What the fuck is this U2 album doing on my phone?!

This was the scenario taking place in millions of bedrooms on the morning of 10 September, 2014. Because it was on this day* that U2’s album Songs of Innocence was automatically added to 500 million iPhones, triggering one of the biggest controversies – and one of the worst apologies – in modern music history.

“People who haven’t heard our music, or weren’t remotely interested, might play us for the first time because we’re in their library.” – Bono

There had been rumblings that something was going to happen. U2 hadn’t released an album since 2009, the longest break of their career. On message boards there was speculation that they’d play at the Apple iPhone 6 Launch in September. Both Apple and U2 denied the reports, but there was precedent – back in 2004 Apple had done a limited-edition iPod with U2’s entire back catalogue pre-loaded onto it.

Apple CEO Tim Cook went through the first hour of his presentation. Cook had taken over from Steve Jobs in 2011, and had kept the informal product launch format that had helped make his predecessor an icon. But while Jobs always seemed like a rock star at these events, Cook was more like an out-of-touch geography professor trying to teach a Year 9 sex education class. He smiled awkwardly as he unveiled first the iPhone 6, then the original Apple Watch.

And then the moment

Cook welcomed U2 onto the Cupertino stage, and said they’d be performing their new single –  a world exclusive. The crowd of Apple employees, journalists and tech junkies cheered. U2 ran through ‘The Miracle (Of Joey Ramone)’ (an absolute stinker that you can listen to as part of your issue playlist if you’re a Loud And Quiet member/masochist). It was a bit flat, but corporate gigs usually are.

Bono and Cook embraced, and followed that with some awkward dialogue about how U2 and Apple both love to make great products, and wouldn’t it be amazing if everyone in the world could receive U2’s new album all at the same time? Well it turned out they could, and at that moment Songs of Innocence was added to hundreds of millions of music libraries across the world.

For Apple, the idea was that this publicity stunt would bring in millions of new iTunes subscribers who wanted to hear the album for free. Further, some of U2’s rock and roll glamour would rub off on them.

For U2, it was a no-brainer. Their album was effectively being sold to 500 million people, and they’d get a ton of press coverage. Further, Apple were prepared to pay them around $52m** for exclusive rights to the album for five weeks.

“Every iTunes customer gets this album, this incredible album for free. That’s over a half a billion customers and it makes music history because it’s the largest album release of all time.” – Tim Cook

And then the backlash

Both Apple and U2 were immediately criticized over the release of Songs of Innocence. The reaction on social media was predictably hostile, and an aggregate of those messages might read something like, “I didn’t think I could hate U2 more, but Apple found a way.” Meanwhile, some musicians said that giving the album away for free devalued music, and made it less likely that people would pay to buy other albums.

Others didn’t really get what the fuss was about. Yes, Songs of Innocence had appeared on iPhones unannounced, but it wasn’t like it started playing automatically. In fact, the album didn’t even download itself unless you requested it. You didn’t have to listen to it if you didn’t want to, and you could always delete it from your iTunes if it bothered you that much.

Meanwhile, many millions of people were happy that they had a U2 album for free. In 2014 streaming wasn’t quite what it is now, and so many people were still buying albums from iTunes or elsewhere – usually for $9.99. For a lot of fans, the album giveaway was a generous gift.

“If you would like U2’s Songs of Innocence removed from your iTunes music library and iTunes purchases, you can choose to have it removed. Once the album has been removed from your account, it will no longer be available for you to redownload as a previous purchase.” – Apple

And then the apology

At first Apple thought the problem would just go away. But as more and more people discovered they had an unwanted album in their iTunes, the backlash grew and grew. Instead of people talking about the new iPhone and Apple Watch, people were talking about how annoyed they were. In the end, Apple had to issue special instructions on how to remove the album from its devices.

U2 had expected some people wouldn’t be happy about having the album foisted upon them – in the release statement, Bono had told people who didn’t want Songs of Innocence to think of it as “junk mail” – but the negative reaction was far bigger than they’d imagined. It was now over a month since it had dropped, and people were still pissed. The band would have to do something.

That something turned out to be one of the most lukewarm apologies of all time. In a video Q&A session on Facebook, Bono said “oops, sorry” and blamed it on a “drop of megalomania, [a] touch of generosity.” It didn’t help that he was wearing sunglasses that obscured his eyes, or that the rest of the band laughed while he spoke. As for the claim that U2 were devaluing music by giving it away for free, the band addressed that separately. They got paid by Apple, they explained, so the music wasn’t being given for free.

“I had this beautiful idea and we kind of got carried away with ourselves. Artists are prone to that kind of thing. Drop of megalomania, touch of generosity, dash of self-promotion and deep fear that these songs that we poured our life into over the last few years mightn’t be heard.” – Bono

And then nothing changed

What U2 had failed to understand is that even though music collections had become digital, they were (and are) still personal. It might not be as satisfying having an album saved in your iTunes as it is having a physical copy on vinyl, but it still means something – it’s an expression of the self. Imagine coming home to find a book by an author you hated displayed prominently on your bookshelf, and you had no idea how it got there. Wouldn’t you feel a bit annoyed, a bit violated?

The band also cheapened their artistic voice by releasing it in this way. Music only has value when someone chooses to listen to it. Yes, 500 million people had the album, but not a single one of them chose to have it. For an album that they claimed was their “most personal ever” it wasn’t a very personal way of sharing it.

The irony of such a cynical release strategy being used on an album called Songs of Innocence was not lost on people.

Not that it really mattered, because the stunt actually worked very well for U2. Yes, many people were annoyed, but many more listened to the album. In the following weeks, all of U2’s back catalogue appeared in the album charts at one time or another, so in addition to the millions they got from Apple, they got millions more in extra sales. The following Innocence + Experience Tour brought in $152m, with more than 1.29m people attending the concerts.

For Apple, too, the backlash was only temporary. Yes, tying themselves in with U2 – a band whose best days were some 25 years behind them – helped to confirm that they weren’t the cool company they pretended to be under Steve Jobs. And the product launch itself was certainly annoying. However, given that Apple had reportedly kept its Chinese factory workers in slave-like conditions, violated its customers’ privacy on multiple occasions, and sent out updates that deliberately slow down machines so people would buy new ones, without affecting sales, it was unlikely that a single U2 album would change much – and it didn’t. Since that 2014 launch, Apple’s global sales have risen from $182bn to $274bn, a rise of about 50%.

In the end it made a lot of noise, but Songs of Innocence didn’t change much. People that hated U2 still hated them; people that loved them still loved them. People still bought Apple products, and no one boycotted them. And even the idea of a mass album giveaway didn’t disrupt the industry, not because it was a failure, but because something else did: streaming. The move to streaming and subscription models means that artists simply don’t sell many digital copies anymore. It’s hard to get exact figures, but each year U2 earn around $2-3m from streaming, and that is growing all the time, without them having to record or release any new material, or even market themselves. I can listen to any U2 album I like, right now, if I choose to, just by opening my Spotify account.

I choose not to.

“No apologies if it gets excruciating. What’s the point in being in U2 if you can’t go there? There is no end to LOVE.” – Bono

* The album was actually released on the 9th, but because of the time zones most people will have received it on the morning of the 10th.

** There are a number of estimates for the amount they received, but the consensus seems to be that it was around $52m.