I moved to Leeds to go to art school and I loved it. Leeds didn’t have the musical baggage of other cities like Liverpool and Manchester, which meant that you had the freedom to do anything. We had club nights like Pigs, Bad Sneakers and The Village Green and ace venues like the Brudenell Social Club. It wasn’t all sweetness and light as Leeds was still a pretty tough place. Blokes would throw pint glasses at us when we walked to rehearsal and my mate lost a few teeth after one of our gigs.

2005 started with a banging headache and the threat of eviction from the flat the three of us in Black Wire [Dan Wilson, Si McCabe and Tom Greatorex] shared. We had finished recording our album on New Years Eve 2004 and went straight from the studio to play an impromptu gig at a tiny club in Leeds. I remember wearing a black tuxedo I bought from a charity shop in Middleborough and luring everyone back to our flat with the promise of White Lightning and a CDR of new Cribs demos. I remember being really happy with some Burberry socks that I got for Christmas and some kid nicked one of them while I was crowd surfing. That’s when I knew we were onto a winner! Thankfully we managed to avoid eviction and spent most of January in the studio working on B-sides and demoing new songs. It was around this time that we got a message on MySpace from a guy in America who wanted to manage us out there.

Within two days of contacting us he was in Leeds dancing around our studio like a man possessed. A month before the album was released we couldn’t get into our own gig because the bouncer said the venue was over capacity. I ended up sneaking in through the fire escape and about 50 kids dressed like a cross between Richard Hell and Edward Scissorhands followed behind. We had built up our own little army of fans and I knew they would love the album as much as I did. The album launch involved us playing three gigs in three different cities and all day I was getting texts from our manager saying ‘fucking hell we’ve sold another album’! The last gig of the day ended with a stage invasion, naked crowd surfing and a man dressed as a priest biting Si’s ankles. We left our manager to pay for the broken microphones and disappeared before anyone else tried to bite us.

We were definitely a cult band, and if you had signed up to our little family then I think you loved the album. What surprised me was when The Sun gave us a 5 star review and declared that ‘the future is dark, the future is Black Wire’. I felt like we had gatecrashed the mainstream for a brief moment and I also felt a bit dirty, as I hate that rag.

Every small town and every city had their own scene in 2005, everywhere had their local Libertines or Queens of Noize and they were starting club nights. We played in Newcastle and there was a really low stage and the security were panicking. For the last song I climbed the PA and the crowd stampeded forward. It was like looking down on a sea of limbs and hairspray and I couldn’t have been happier. When we got backstage we realised that Si had landed on a pint glass during the scuffle and the promoter offered us a case of blue WKD as an apology.

Touring with The Cribs really helped us reach a wider audience. They were about to release their second album and it was really inspiring to see their band get bigger without having to compromise. It was ace to see kids turning up to our gigs in Cribs t-shirts and I still have a lot of respect for the Jarmans.

It was around this time that the NME coined the ‘New Yorkshire’ movement. I thought the tag was great – I remember doing a photo shoot for the NME and it was a teenage dream come true. The publication is obviously London-based so it was good to be part of a movement that forced some journalists to venture further north than Camden.

My favourite albums released in 2005 were Maximo Park’s debut and Gemstones by Adam Green. These records didn’t exactly revolutionise music but I loved them. What I found most interesting about the music scene back then was how eclectic attitudes were becoming. We would be at home listening to the Birthday Party and Tom Waits then go out and dance to Kanye West, Test-Isicles and MIA, which sounds tame now but it was proper exciting when you’re out of your mind in West Yorkshire and the DJ has just promised to play LCD Soundsystem again. I don’t want this to sound like a eulogy, but 2005 was amazing. We were so dedicated to Black Wire that nothing else mattered.

Before I went to art school I had resigned myself to the fact that self expression and creativity were reserved for a privileged few. Being in a band gave me a real sense of belonging and gave me a creative outlet and at one point I think it definitely defined who I was, probably because I called myself ‘DAN BLACK WIRE’ on myspace.

As told to Daniel Dylan Wray 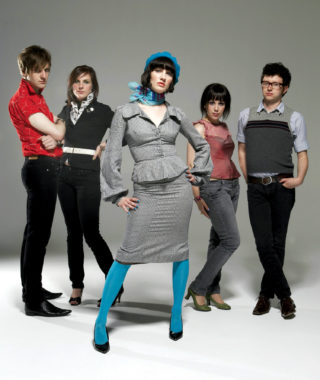