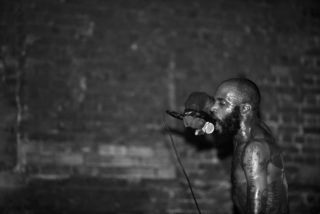 Generally when a magazine or website wants to cover a show for a band, they’ll send the lovely PR person a note asking for a couple of guest list slots and that’ll be that. Suffice it to say that – as with everything else – things work a little bit differently with Death Grips. With no discernible PR or record label to grease the gears, getting a slot at tonight’s sold-out Village Underground show involves haggling with a beleaguered tour manager, rocking up on the night and hoping for the best.

Once inside though, all of that is forgotten. In fact, for 90 minutes, Death Grips’ punishing, 100-decibel whirlwind of hip-hop, hardcore punk and industrial music is utterly all-consuming. From the off, a shirtless, muscle-bound MC Ride utterly dominates the stage; alternating between prowling, one-footed jumping and lunging towards either the crowd or his bandmates, depending on how the mood takes him. He delivers verses rat-a-tat in time with the music with machine-gun precision. 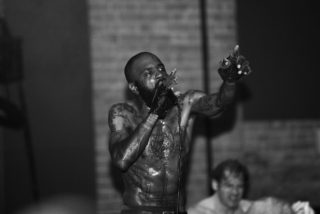 There is no audience rapport; no jokes, no small-talk. There doesn’t need to be and in any case, the crowd aren’t here for that: they’re here for self-destruction. If Village Underground has a capacity of around a thousand, there can’t be more than a hundred people who aren’t fully engulfed in an orgiastic maelstrom of body slamming, pint-throwing and complete abandon. Your correspondent takes refuge on a raised platform by the soundboard to survey the chaos. Down below, a largely male crowd seem intent on catharsis through near-riotous physical confrontation; limbs flail, people are sent flying a dozen feet sideways and a constant stream of crowd surfers navigate the choppiest of seas.

Each track – “song” seems reductive here – segues instantly into the next and the set is as much a gruelling physical endurance exercise for the band as it is a punishing aural assault for the audience. Drummer Zach Hill turns in a stunningly aggressive, non-stop performance and Andy Morin hammers his synth rig till the last.

Fragments of choruses arrive and are duly belted back by the crowd – “Hustle bones comin’ out my mouth!” – and twisted synth lines are teased from the squall with a roar of approval (‘I’ve Seen Footage’). Really though, anybody here for hooks chose the wrong band and as if to prove the point, closer ‘The Fever (Aye Aye Aye)’ descends into all-out carnage as the crowd froth themselves up into a final, frenzied release. There is no encore – everybody is spent. A career-defining performance. 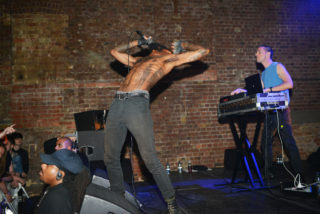