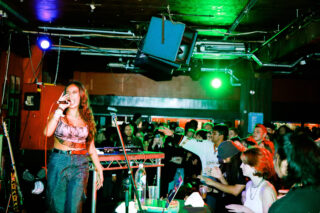 There are few London venues more iconic than the 100 Club. The Oxford Street basement has been open for nearly 80 years, and continues to bring excellent alternative music to an area now best known as a shopping destination. Over three nights, All Our Tomorrows continued this tradition, celebrating the legendary venue with three sold-out gigs showcasing exciting young musicians from up and down the country. 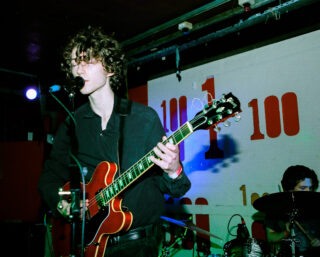 The Fred Perry-run new music festival is now in its fourth year, and previous editions have featured the likes of Black Country, New Road, Jockstrap and Squid. This year’s lineup promised a new roster of “ones to watch”, and they didn’t disappoint. It was only right that a festival named after a song by The Clash, and taking place in a venue with such strong ties to punk (hosting the Sex Pistols, The Damned, the Buzzcocks and more in the first ever punk festival in 1976), should highlight the genre’s best newcomers, and Wednesday night was dedicated to doing just that. Honeyglaze, who had that day put out their latest single ‘Burglar’ on Speedy Wunderground, kicked things off with a dreamy, meditative set. Regressive Left then brought their politically-charged melodic punk to the fold, with singer Simon Tyrie staying true to their name in a T-shirt which read “Keir Starmer is a wet wipe”, whilst bouncing around the stage.

Automotion [pictured above] have been playing London’s smaller venues for a while now, but their set showed a desire to think bigger, giving the Americana inspired tracks from their recent EP a heavier spin. The excellent Grandmas House took things up another notch, with their indignant, playful punk calling to mind some of those legendary bands from the 100 Club’s past. Enola Gay wrapped up the evening with a bang, and an impressive amount of energy for a Wednesday night. The Belfast band have been gaining traction with their relentless, reverb-laden noise rock, and in their first London show they proved more than worthy of the hype. 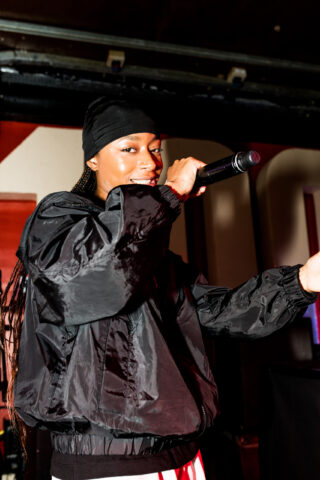 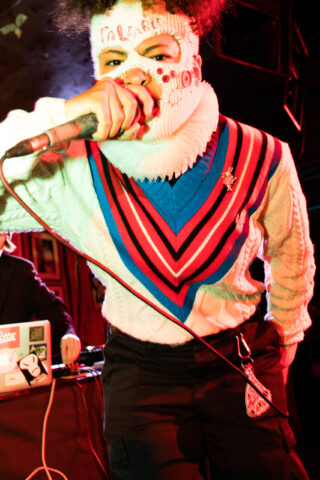 Thursday night might have focused less on guitar music, but a DIY punk spirit was just as present. London based Nia Archives opened the show with her nostalgic, rave influenced neo-soul, followed by a high energy set from experimental artist TaliaBle [pictured above right], who descended from the stage fully masked to start a mosh pit. Next came the enchanting RADA, whose mellow, hypnotic vocals quietened the bustling room and brought a rare moment of calm to the proceedings. This didn’t last long, as up-and-coming rapper BXKS [pictured above left] followed up with an explosive set, her boundless enthusiasm matched by the audience.

It was hard to believe NAYANA IZ’s effortlessly cool performance was her first headline show; the NiNE8 Collective member seemed in her element on stage, bringing together rap, soul and hip-hop elements along with inspiration from her Indian heritage to form a sound all of her own. She beamed with gratitude for her band and her fans, who seemed equally thrilled by the opportunity to watch this undeniable talent in such an intimate setting. Fellow collective member Mac Wetha was on hand to DJ, as was Nasty Nige, and other friends and collaborators Louis Culture and Pullen, imbuing the evening a strong sense of community spirit. 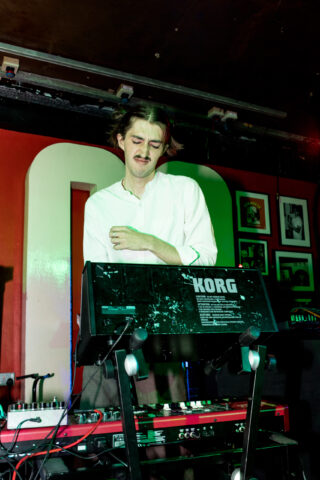 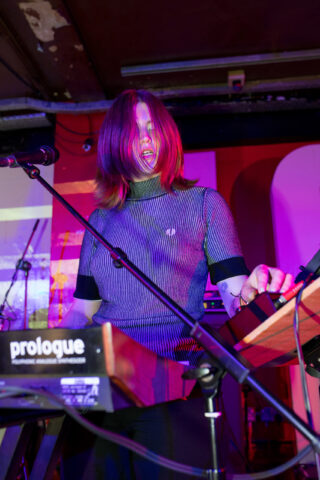 On Friday there was another change in pace, with a lineup which was more electronic and avant garde in style – starting with The Umlauts [pictured above left] and their eccentric, multilingual synth pop. Dean Blunt and A$AP Rocky collaborator POiSON ANNA followed, offering ethereal, disjointed trip hop. Windmill regulars Paddywak have been building a reputation with their irreverent, crude art-pop, and their high-octane 100 Club performance was as compelling as ever.

Belfast DJ and producer Mount Palomar was an elusive presence on stage, but with his rhythmic techno and modular synth experimentations, and the accompanying light show, the crowd began to loosen up. PVA [pictured above right] were the last live act, and their set came after a summer of great festival shows for the London band, perhaps explaining how tight they sounded. Their cohesiveness as a group didn’t take away from their electric, fervent energy though, and the Ninja Tune signees still feel as exciting and limitless as they did when they first emerged in 2018. Lynks closed out the night with a highly theatrical, and danceable, DJ set, following brilliant earlier sets by Queer House Party and Slow Dance’s Maddy O’Keefe.

After last year’s virtual event, this bringing together of emerging and underground talent felt more vital and necessary than ever. Though the atmosphere and demographic changed, each night of All Our Tomorrows had the same objective at its core – supporting and fostering creative communities. It’s what this venue has always done, and, despite the chain stores surrounding it from all angles, it feels encouraging to see young people gathered underneath the red neon sign marking the 100 Club’s entrance – laughing, smoking, talking about music – just as they have been doing for decades. Long may it continue.